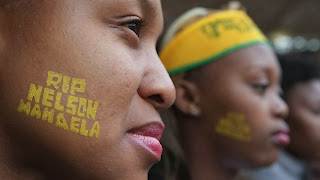 A headline in the right wing conservative National Post reads:

"After sneaking past security to get into Mandela event, Mulcair bops along with Kim Campbell’s dance moves"

Someone at the National Post is fond of writing sensational right wing headlines that have a significant disconnect with reality and not even connected with the words of the attached article.  This title needs a walk-through, as it is more highly salted with mockery and propaganda than most.  And I find it particularly in  bad taste that the National Post's title mangling editor is using Nelson Mandela's memorial like this.

Let's start with Mulcair sneaking past security at Nelson Mandela's event. By way of explanation, Thomas Mulcair is the leader of the opposition in Canada's federal government, and apparently annoys Conservative Prime Minister Stephen Harper, by asking too many questions in parliament.  By stating that he is a sneak, The National Post (which supports Harper) degrades Mulcair's public image.  And if this occurs at Nelson Mandela's funeral, you also imply Mulcair would not have been welcome at the world hero's funeral.  Nelson Mandela is most famous for opposing racism and Apartheid in South Africa.  The truth is, that Mulcair's NDP party actually is far more in line with the anti-racist, pro-peace views of Mandela than the Conservative Party of Canada, which struggles to keep its racist element in check.  (for proof of that, you only need to read the comments following almost any article in the National Post)

After reading this article, (and I can only hope that the National Post readers actually read the articles) it is quite obvious that Mulcair did not sneak past security.  It was a mixup at the security outside the stadium, probably very run-of-the-mill happening.

Next, the dance moves.  I actually have more to say about that, as I lived in West Africa for three years during which time it gradually became obvious that Africans dance to everything.  Actually, I could go even further and make a strong case for all our modern popular dance in North America (at least since the end of the big band era) having African roots, including the Twist.  Back in the fifties, when it first started becoming popular among White Americans, there was a massive backlash against it, claiming that this type of dance was only appropriate for Negros.  And even today there is a slight residual negative feeling about dancing (or "bopping" as the Post calls it) among our more stuffy white right wing citizens.

I myself am not a great dancer, OK not even a good dance, OK pretty bad dancer.  I would probably lose a dance contest to Sheldon Cooper of the Big Bang Theory.  But never mind that, I did dance while I was in Africa.  You have to be very stuffy indeed to not feel the infectious rhythms, and nobody makes you feel foolish for dancing.  I say that despite the fact that my high school age students used to invent dances based on their white teacher's dance moves.  There was no offence intended, and none taken.  It was actually all in good fun.

Just to give one more example, although this one is not in Africa, the funeral marches of New Orleans. Watch this one.
http://www.youtube.com/watch?v=InqnQ8vU3DU

Dancing in Africa does not have the scandalous, and sexual overtones that it has in Canada, especially among older white conservatives.  It goes on at any time, and funeral celebrations are no exception.  I applaud Kim Campbell, a past Prime Minister of Canada (Progressive Conservative party, long story) and Thomas Mulcair for being open to the spirit.

Here is another dance video to illustrate: George Bush dancing on the White House lawn in 2007 during Malaria Awareness Day, in company with a dance troupe from West Africa.  (This is the video, ignore the caption about Ossetia, it's just wrong, at best maybe it's humour)