This So-called "Optical Illusion" Should Make You Question Everything 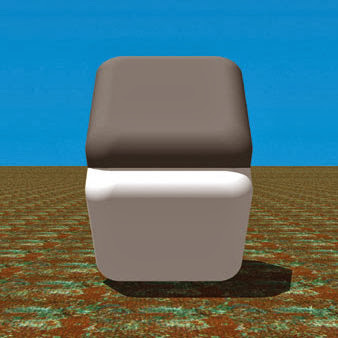 The exaggerated headline in Yahoo news read "Optical Illusion Will Make You Question Your Eyesight".  The truth is, you actually should question your eyesight, and there are hundreds of optical illusions available to help you do that.  But this is not one of them.  Why?  It is based on the Cornsweet illusion, and unfortunately, by attempting to jazz it up a notch, the presenters have kind of lost the original illusion's point.

The question is, which object is lighter, the top of the bottom.  The bottom one looks lighter, but the presenter says actually they are both the same, and you can prove it by blocking the center part of the image out.  OK no, that's not an illusion.  Because in this version of the illusion, it is quite obvious that there is a light source, and that given the light source and shading in the picture, the bottom object is actually lighter.

If you were to check the original Cornsweet illusion, you would notice there are no shadows, it is not an attempt to paint a 3 dimensional object.  It is a pure scientific illusion, showing how our perceptions are influenced by a boundary with brightness contrasts.

To explain it another way, your eyes are not really fooled.  Any painting, where shadows are used to simulate a 3 dimensional effect will use a similar illusion.  For example, to darken one side of a ball to make it look spherical with a light source.  It should come as no surprise that, in real life the ball was supposed to be a uniform colour, but the painter used a darker colour on one side and a lighter colour on the other.  That is not an "optical illusion" in the true sense. (all 3D paintings are in some respect an illusion, but let's not get too philosophical)

You are not really being fooled by this picture.  Your eyes are simply telling you that if you saw that scene in real life, the bottom shape would necessarily be lighter.  In fact there is no "normal" way to set up that scene in real life without having the bottom shape lighter.  And by normal I mean without using specially focused multiple spotlights or other trickery to lighten or darken the shapes.

But, I accept that in the picture, the paint colour of the two flat areas would be the same, and you would probably not notice that without blocking out part of the image. However, that is not a real optical illusion if you are stating the "top object is the same colour as the bottom object", as it is quite clear that the rounded edges are part of the objects, and they are not the same.

What I wonder about is how easily someone in the hustle of ad-driven media can screw up a perfectly fine optical illusion and pass it off as real. And I also see once again, how Wikipedia, dull as it may be, almost always gets it right.