The Hidden (to some people) Message of "The Interview" 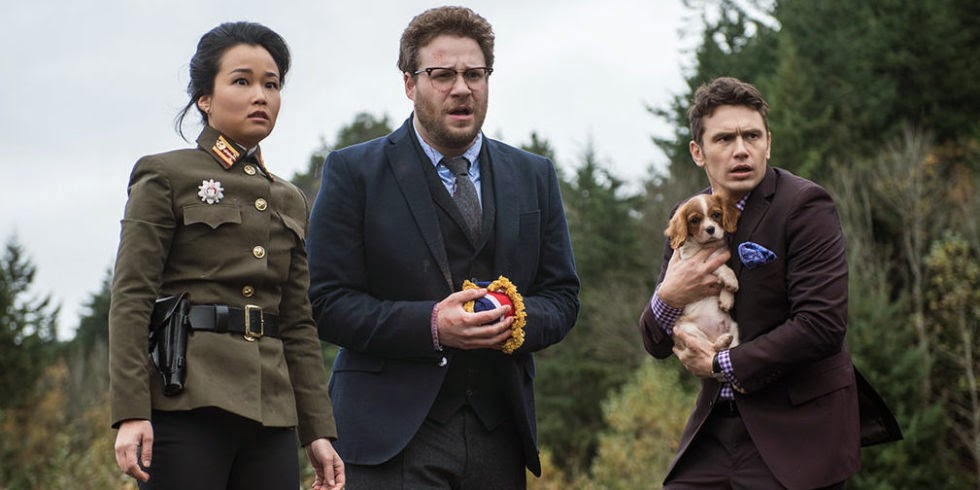 Last night, "The Interview" was on at the Princess Cinema in Waterloo.  I went to see it on my own, as Mary Ann is not overly fond of fart jokes, sexist humour, and defying Kim Jon Un.

My initial interest in the movie was that I actually do find Seth Rogan's humour to be funny despite the occasional fart joke.  But then, when the full release of the movie at Christmas was cancelled because of threats from North Korea, it was of course my patriotic duty to see the movie at my local underground art movie theatre.

I had a few laughs, and was entertained all the way through.  But more importantly, I think there is a hidden message in the movie.  I say hidden, because apparently some people just didn't see it, although it is glaringly obvious.  This movie is a message about propaganda, not only in the movie itself, but the hype and controversy around the movie too. You can take it on many different ways.  One way to look at the movie, is that it is deliberate American propaganda, supported by the government agencies, to try and discredit Kim Jon Un. Another way to understand it is that North Korea is trying to block opposing propaganda with terror threats.  Or maybe the terror threats are all made up, as there is no hard evidence the North Koreans ever threatened anything other than their usual thermonuclear war.  Of course, thermonuclear war doesn't worry anyone in the USA, but the idea of a crazed Korean gunman wandering into a movie theatre somewhere does get people excited.

Inside the movie the subliminal message is that propaganda and manipulation is everywhere. Propaganda and manipulation are slightly different, in that manipulation is more on an individual basis, while propaganda is usually for the masses, but the lines are being blurred.  The CIA uses a "honeypot" manipulation to get our hero, Skylark, (James Franco) to cooperate in assassinating Kim Jong Un.  Skylark is easily manipulated by a beautiful female CIA agent wearing glasses (even though he later finds out the sexy glasses are as fake as everything else).  Skylark is also easily manipulated by Kim Jon Un, despite being adequately warned by Seth Rogan before meeting the Dear Leader and master of manipulation. Un comes across as a very likable guy, and even had me taken in during the movie.  How can you kill a guy that plays Katy Perry music in  his tank while doing a little artillery practice on local trees?  And wonders if Margaritas are too gay?  And gives you an adorable puppy that reminds you of the dog you had when you were growing up?

At the end of the movie I was truly shocked to find out that Kim Jong Un was actually a ruthless dictator who deserved to die. At least, if you can believe the propaganda.