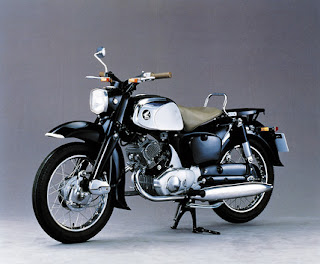 The word of the day is ticky tacky. "The Lost Motorcyclist" came to this word by a fairly obscure route. First there was this so-called "Toyota Prius ad" on youtube: "You bought a Prius???"

So actually this is not an ad, as I found out later, but from a TV show called "Weeds", which I had never seen, about a widowed suburban mom who is forced to turn to a life of drug dealing in order to avoid simplifying her lavish lifestyle. The theme song of this TV show is "Little Boxes", a 1962 folk song by Malvina Reynolds, making a social commentary about suburban sprawl

The song refers to suburban houses as "little boxes made of ticky tacky, and they all look just the same."

Now that I am caught up again with pop culture, I am going to relate this back to motorcycling, where one of the great debates is about "ticky tacky motorcycles" looking all the same.

When Japanese motorcycle first came on the market in large numbers, it was about the same time the song "Little Boxes" was first written. And the general idea could also be applied to the cheaply mass produced Hondas, Yamahas, Kawasakis and Suzukis. Especially compared to the more expensive, more hand crafted bikes in limited quantities such as British, American, and Italian bikes. The BMW's, Triumphs, Harleys and Benellis were said to have more character than the Japanese machines.

The traditional motorcycles had a firm grip on the market, but it quickly began to slip for two reasons. First, the Japanese bikes attracted new customers to the market because they were easier to use and cleaner (as well as cheaper). So Honda and Yamaha did not have to win over the hard core bikers to stay profitable. Then finally the experienced motorcyclists caved in as the Japanese bikes established themselves with new dealers and new riders who fearlessly traveled the country without needing to overhaul their bike every few days.

Although by reputation, the Japanese bikes were "ticky tacky" (shoddy materials and construction), the truth was they were actually made of very good quality materials. Eventually all motorcycle makers had to copy Japanese design and manufacturing methods or go out of business.

But today the debate still rages on. The true building material for motorcycles is seen to be iron, chrome, steel, rubber and leather. Plastic, aluminum, and vinyl are more "ticky tacky". You can see the difference right away in my mass produced Kawasaki Vulcan, which has chrome-looking plastic all over the engine. Also plastic fenders, seat base and other odds and ends. But it is about half the price of an equivalent machine with more character.

Picture. This motorcycle may have been considered a cheap mass produced item in 1958, but today is a rare and exotic classic. The 1958 Honda Benley C90 from this Honda website:

Zen saying: Wait 1000 years and see how it looks.
Copyright the Lost Motorcyclist