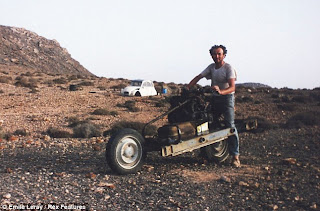 One of the aspects of motorcycling that I find most fascinating is the possibility of doing roadside repairs to get out of a stranded situation.  Just a few weeks ago, I had a flat tire on the road and had to improvise to get home. Actually, I didn't really do much, as I drove the bike on the flat tire to the nearest gas station. Eight years ago, I got stuck in my Toyota Matrix while off-roading in Baja Mexico, and was rescued by a nearby camper who spotted the plumes of sand the car was kicking up. Recently I found a story that tops everything I have ever known up to now for getting stranded.

Emile was driving off road through the Sahara Desert, alone, when his 2CV car broke an axle and swing arm.  Apparently he decided that his only chance of survival was to cannibalize the car to build a makeshift motorcycle.  This project took him 12 days, after which he drove the motorcycle back to a main road where he could be arrested and fined for driving an unlicenced vehicle.  (His modifications were too extensive for his original licence plate to be legal - although the plate was affixed to the makeshift motorcycle.)

I have checked this with a few different sources, but although it seems legit, it is so over the top that I am still harboring a suspicion that it might be a hoax.

Picture: OK I'm also surprised that Emile also had the time and/or mental wherewithal to take pictures during this episode.