Towards a Garbage-Free MacLean's Magazine 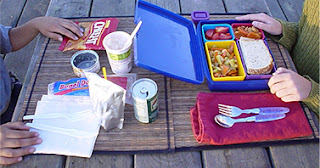 MacLean's magazine has a new article by Cynthia Reynolds titled "Why are schools brainwashing our children?"

In this article Cynthia gives examples of situations where children in Canadian schools are being brainwashed into being tolerant and caring for the environment.

Let me take one example.


"In Laval, Que., a six-year-old boy was disqualified from a teddy-bear contest because a Ziploc was found in his lunch".

Now if I may clarify this a little: It was not a Teddy Bear contest, it was a draw for a teddy bear in a garbage free lunch contest. Yes, the difference is important. What is a garbage free lunch?  It is a lunch that has no garbage in it.  What is garbage? Any throw-away one-use container.  Now, let's go into this a little bit more.  A drink box has garbage (the box and the straw.) An apple core is not counted as garbage.  A candy bar has garbage. (The wrapper).  Any garbage in your lunch means you don't have a garbage-free lunch. A tupperware container is not garbage because it can be re-used.  But if you throw the tupperware container away, it should count as garbage.  If you remove the wrapper from the candy bar at home and put the naked bar in a Tupperware container, the teacher has to make a call one way or the other.  A Ziplock bag is not necessarily garbage.  It can be taken home, cleaned and re-used.  But if it is thrown out after one use, it is garbage.  A fair teacher would accept the ziplock bag as long as it is taken home and re-used, but of course it's impossible to know the truth.  Obviously, garbage free lunch games are not that simple.

Now to explain a little bit about teaching. Teachers generally reward students learning with scores and marks, rarely with material goods.  That's because the school budget does not allow for it.  So who paid for the Teddy Bear prize?  I couldn't find out, but it might have been an old item that the teacher needed to get rid of, and if so, the teacher had found a good way to divert one more bit of garbage from the landfill. Very unlikely to be the taxpayers footing the Teddy Bear expense.

Now what about the ziplock bag scandal? I think a case could have been made for the ziplock bag in a garbage free lunch, but first you have to understand what is going on.  Sometimes six year old kids make mistakes. That's why we have teachers.

Now why do Conservatives (and their propaganda machines like MacLean's Magazine) hate it when children learn about garbage?  Probably the same reason they hate children to learn about tolerance.  Conservative propaganda has two main pillars: support for corporate profits, and hatred for "others".  It suits the conservative agenda to keep people as ignorant and easily-led consumers of throw-away trash.  The last thing conservatives want is for children to learn about the environment, because that might affect corporate profits.

Why would MacLean's sensationalize this simple story?  And does MacLean's do the same kind of one-sided misrepresentation when they are stirring up hate against minority groups?  The answer is yes.

MacLean's is a conservative, bigoted magazine.  I think the more appropriate question would be "Why is MacLean's Magazine Brainwashing Canadians", but I think we all know the answer. Because it pleases their rich owners, and stirring up hatred is the best way to brainwash people.

Next, the goal for MacLean's: Let's try to put out a garbage free newsmagazine.