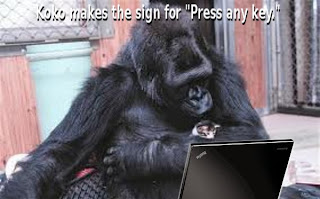 If a human speaks truthfully only once in their entire life, they are still an honest person. But if a Gorilla tells one lie, that gorilla is a liar for the rest of their lives.   This is a double standard.

In California, there is a female gorilla named Koko, who has been taught to speak in sign language. With an I.Q. of about 75, and a vocabulary of 1000 sign language words, she can form sentences and make up new compound words.

There are reports that Koko lied once.  Once, when left alone, Koko tore a sink out of the wall.  When her human discovered the ruined sink, and asked Koko who did it, Koko blamed her pet kitten.  Yes, Koko the gorilla had a pet kitten.  How did Koko get a pet kitten?  She asked for one through sign language, of course.  Anyway, With this one lie, Koko is now famous for being a liar, even though everything else she says is true (e.g. Koko want banana)

I have noticed that lying is more acceptable among humans than among gorillas.

Performing experiments on Koko could answer a lot of questions for us.  I have an idea for an experiment to force Koko to watch Fox News 24 hours a day.  After a few weeks, will this gorilla begin to forward right wing e-mails?

I am also interested in whether a Gorilla has the "God Gene", enabling them to have paranormal spiritual experiences.  I suspect that somebody has already spoken to Koko about religion. In wikipedia, I read that Koko named a Macaw "Devil tooth" because of the Macaw's dangerous beak.  So I assume at some point an attempt was made to convert Koko to Christianity, because otherwise how would Koko know the word "Devil". Unfortunately, I could not find out what Koko's religious affiliations were.

I Googled this website, titled "Koko the Gorilla PROVES Evolution a Lie!".  My immediate thought was that the born again Christians had gotten to Koko, and now Koko thinks that evolution is a lie.  But how would a gorilla, even as smart as Koko, prove Darwinism is a lie, while many humans have not been able to do so.

Unfortunately, it was not Koko's clever arguments that proved evolution was a lie.  It was the existence of Koko that proved humans could not have descended from apes. (The reason being if apes turned into humans, then how come Koko is still here?)  Frankly I was  disappointed, as I was looking forward to reading about Koko's thoughts on evolution and instead I got the thoughts of David J. Stewart, a Born Again Christian, and a long time non-gorilla.

If I understand religion correctly, God has made it possible only for Humans to commit sins.  The concept of sin does not apply to animals, therefore Koko can never "be saved by Jesus".  However even though Koko is an animal, it appears that she has officially sinned in the Human sense. Koko was once accused of sexual harassment in the workplace. I am not sure how the lawsuit against Koko ended, but innocent or guilty, where there's smoke there's fire, I always say.

I found a web page with an online chat between Koko and other AOL users, (no jokes about AOL users please.)  Many AOL'ers found Koko's conversation boring and began to dismiss her intellectual abilities.  If you are familiar with what people say about AOLers, this is a real put down.

Picture: Koko uses sign language to show Pet Kitty how to chat on AOL.  I photoshopped the computer and the words.  The Kitty is real.
Copyright the Lost Motorcyclist