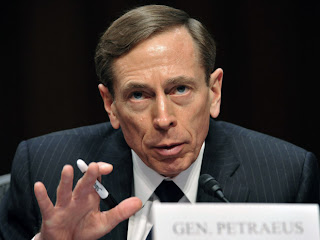 I was just reading through Canada's National Post on the subject of General Petraeus and his remarks today on the Benghazi situation.

First I will rant about the headline of the National Post story contradicting the text, with the headline as usual leaning to the right and the text (and presumably the more accurate and fact-checked) text of the story skewing to the left.


The text contains this

"Rep. Adam Schiff, D-Calif., said Petraeus disputed Republican suggestions that the White House misled the public on what led to the violence in the midst of President Barack Obama’s re-election campaign.
“There was an interagency process to draft it, not a political process,” Schiff said after the hearing. “They came up with the best assessment without compromising classified information or source or methods. So changes were made to protect classified information.
“The general was adamant there was no politicization of the process, no White House interference or political agenda,” Schiff said. “He completely debunked that idea.”
Schiff said Petraeus said Rice’s comments in the television interviews “reflected the best intelligence at the time that could be released publicly.”

Once again, the title composer at the  National Post seems to have a right wing agenda.  But I suppose I should be thankful that the text itself is not pure fabrication, like Fox News in the U.S.  I'm thinking the real title, before the composer redid it, might be seen by reading the computer filename in the internet link (which I suppose the title composers forgot to edit: )


Next, I made the mistake of reading some of the comments. Woo-wee!  Is it just me or is the tone of the comment section going to h-e-double hockey sticks in a handbasket?  It is quite clear that people are divided along party lines.  Some people suggest that, had they been President, they would have sent in a large enough contingent of Marines to protect the Ambassador and all the people in the the US embassy.  And furthermore they suggest that Obama failed to do this through sheer laziness, and then lied about his incompetence and dereliction of duty so that he could get re-elected, while 52% of the American public are simply too stupid to realize they have been duped by the mainstream media, and voted for incompetent Obama again thereby completing the destruction of America so desired by people with their heads up their asses.

The pro-Obama side are inclined to give Obama a break for the following reasons: 1. You cannot send marines into a sovereign country to kill people without an invitation, or you risk war, or at least a backlash that could end up killing more Americans and tipping the political balance to the anti-American side.  2. This was not in the embassy.  The consulate, unlike the embassy, is not technically U.S. territory  3. S-h-double hockey sticks happens.  4. The president is not obligated to keep inbred hillbillies informed of every nuance of foreign affairs. 5. Sometimes, diplomacy requires you to keep your thoughts to yourself until the right time.

I am not really sure why Petraeus is such an important witness anyway? He, like Obama, was not on the scene.  Both were in Washington getting their information through the usual channels.  He is not even really a General any more, as head of the CIA. Notice he is wearing a business suit now?

In the final analysis, this difference of opinion shows how much the entire world needed Obama to win the 2012 election.  To keep out the "Shoot first and ask questions later" crowd for at least four more years.  Just to give us some rest before the pro-war faction gets their next turn.
Copyright the Lost Motorcyclist