Who Would God Vote For? 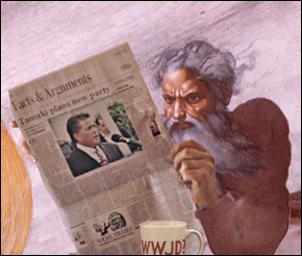 Hurricanes are starting to be a pain in the behind to Republicans. To some people who believe that hurricanes are controlled by God, and that God cares about who wins the US elections, it is starting to look like God is helping Obama.

Does anyone remember hurricane Katrina that wiped out New Orleans and made President Bush and the Republicans look bad?

In 2008, there was a failed Christian prayer campaign for God to rain out Obama's acceptance speech at the Democratic National Convention.

However, a few weeks later, the Republican Convention was disrupted by Hurricane Gustav, forcing President Bush to cancel his speech.

As we all know, Obama won the 2008 election.  Let's move forward to the next presidential election.  Hurricane Isaac, in August 2012 again disrupted the Republican Convention. (Democratic Convention had no problems)

The latest is Hurricane Sandy, which allowed Obama to "look presidential" and apparently convinced a few people he was not trying to destroy America. (Including Republican Governor of New Jersey Chris Christie)  In the end, Obama won a second election, with the hurricanes voting 2-0 for the Democrats in 2012.

I'm not going to make any hurricane predictions based on this pattern, because I think it was all coincidental.  But some people  conveniently forget about unfavourable coincidences, and boast about favourable coincidences as being the result of their personal prayers to God.  I just want to put a reminder here for the next time somebody mounts a political prayer campaign.