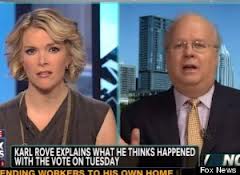 A lot of money was spent in the US election to try and swing the voters.  I think Karl Rove was given about $700 million, and basically all that money is gone.  At least the taxpayers don't have to foot the bill.  But that amount would have been able to bail out half of Chrysler Financial, and would not even have cut into Romney's campaign funds because they were all external funds (Super PAC rules).

I would love to get a piece of that money.  But obviously I am not Karl Rove.  Anyway, to start it off, I will offer some advice for free to the wealthy Republicans, and see if that gets me a job the next time round (if this advice seems good).

Advice from "The Lost Motorcyclist" to fix Republican election problems

Obviously one place to start would be to eliminate racism and anti-female rhetoric, because it is not working now, and the demographics (ignored by your current highly paid experts), are changing to make it even worse.  It is not enough, as Rush Limbaugh suggests, to place minority groups "front and center".  You know why that does not work? Because Rush Limbaugh makes racist comments on radio all the time.  And so it looks very fake to make racist comments and then call on the party to put racial minorities "front and center" at the national convention.

It is not enough, either, as Charles Krauthammer suggests, to give "AMNESTY" to all illegal aliens.  According to Charles, this one simple move could tip the balance, and get the Republicans elected.  I don't think so.  Your first problem is that you have to get elected first.  Because until you are elected, all you can do is promise amnesty.  So your election is based on the assumption that voting aliens will believe you and vote for you to make illegal aliens legal.  Some of those people are going to think you're lying, and some are not going to want amnesty granted to others anyway.  And for sure you would lose many of your racist supporters, guaranteeing you won't get back into power.  So, Krauthammer's strategy is not going to work either.

I see the Republican problem as lack of trust.  There is a perception among many Americans, that Republicans make up facts to get elected.  And I believe that as time goes on, you will have more people thinking like that.  Here is why. You have several high powered, Republican pundits like Sean Hannity, Rush Limbaugh, Ann Coulter, Fox News, and Pat Robertson (and maybe others), who regularly make false claims on TV or radio.  Most of the time, you can count on voters to not bother fact checking for themselves.  But it seems like the population is getting better and better at spotting the falsehoods in the Republican story.  And at the same time, the Republican pundits are making even more outrageous false statements.

Think of Megyn Kelly (normally a Fox News hardliner) asking Karl Rove  "Is this just math that you do as a Republican to make yourself feel better"?