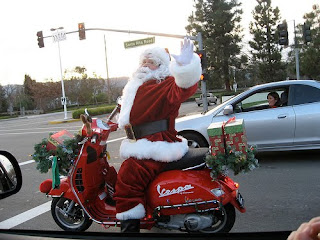 I can remember my surprise the first time another motorcyclist waved at me. I was in Africa at the time, and many pedestrians waved at me as I rode my new Honda 175. But I had been riding for a few months, and had never met another motorcycle on the road. He waved as he approached, and I waved back.

Since that time I have probably waved at thousands of riders, and not waved at hundreds. Recently I have talked to some new riders who don't get all this waving stuff and it makes them feel kind of uncomfortable to have to decide whether to wave or not, or if people will take offence if they don't. When I started riding, it used to be so simple. Now it's a little complicated with so many bikes on the road, and we need some new rules.

First rule, don't take offense if somebody does not wave back. There are lots of reasons why someone may not be able to wave. For example, they might have their hand holding the clutch, or they may be braking because the car in front of them is stopping. Or you might be the tenth person in less than a minute, and their arm is getting tired, or they didn't see you because you are in the right hand lane of a 12 lane freeway and they are on the complete opposite side. I can think of hundreds more, but I will just leave that to your imagination. Just take it easy.

As a rule, I stop waving when I am at a rally with hundreds, thousands and sometimes hundreds of thousands of bikes all over the place. And for the bigger rallies, like Bike Week at Daytona, or Sturgis, I stop waving about a hundred miles from the centre, as there are already too many bikes to keep track of.

On a normal ride (which is near my home in southern Ontario), on a nice day, there are enough bikes that I usually wave back, but don't always initiate a wave. But when there are very few bikes on the road, I will wave first. Those are days when it's raining, freezing, or I'm far out in the hinterlands, where there are not a lot of bikes. It's kind of like the old days again.

Just last year I remember being out on my bike when it was below freezing. I was surprised to see a motorcyclist and his female passenger waiting at a stop sign as I drove by. She waved and smiled brightly. He didn't, but obviously had his hand on the clutch, but I waved back anyway. When I got home I told Mary Ann about this smiling person in the cold, on a motorcycle. She said "That smile's probably just frozen on there."
Copyright the Lost Motorcyclist