Why Santa Feels Safer in Canada 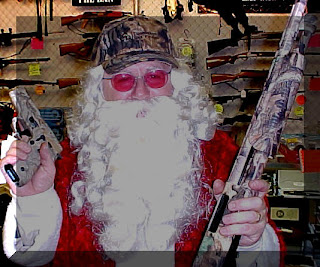 Another of my jolly Christmas specials concerns Santa's safety. I'm not saying that Santa was ever shot at in the USA, but there is a different attitude towards guns in Canada and the US. I started to figure this out at a motorcycle rally in North Carolina, and I guess I was about the only Canadian there. I was conversing with a group of Americans around the campfire. They were apparently interested in some of the differences between our two countries, including our colourful monopoly money. Then we got onto the subject of guns, and I decided to tell this little joke to illustrate the difference in attitudes.

"In 1990, there were 3225 gun related deaths in Chicago. In the same year Toronto had 4. Because apparently, Americans don't tolerate as much bullshit!"


In Canada this would have been a joke. But none of the people around the fire were laughing, they were nodding sagely, "so true, so true".

The same debate starts every time an armed maniac enters a building in the US and shoots and kills a lot of people. Was this incident caused by too many guns, or not enough guns? Although we have incidents like this in Canada, I've never yet heard people seriously suggesting we need more guns to put an end to the problem.

One argument in favour of more guns is that these shootings never take place at gun shows or other places that people carry guns, only in gun-free zones like schools etc. Therefore, if you could make every place like a gun show, there would be no more killing sprees, or to be more accurate, the killing sprees would be shorter.

Now I'm being completely serious, this is how we would argue the point in Canada.

1. Gun shows are not the target of these killers because usually the psychos don't lose their jobs, or have arguments at gun shows. They don't even spend much time there, compared to school, for example. Furthermore, it is a mistake to think a massacre could never take place at a gun show.

Update: recently several armed policemen were killed in Washington state, in a surprise attack in a coffee shop by an armed psycho. This could be considered a real live test of the "let everybody carry guns" idea, and apparently it didn't work, not in this case anyway.

2. Let's think the situation through before we decide to bring loaded, easily accessible guns into every classroom, and every office space in the country. To stop a lunatic shooter we need somebody with a quick, accurate, shot to kill a fellow student who has just turned psycho. We are actually assuming a lot more skill and judgment from the armed students than we have any right to expect. We would at least need some guidelines for deciding when your co-worker or fellow student has flipped out in a dangerous way, or is just a harmless idiot. Do we have to allow them to actually kill somebody first, or can we shoot them as soon as they pull out a gun? If everybody in Canada is armed, you just know that at some point, people are going to be pulling out those guns without actually intending to kill anyone.

Let's assume we are really cautious about this, and first let the psycho kill somebody before you shoot them dead. This might happen: You hear a bang and somebody falls to the floor with blood spilling out, lots of people are already pulling out their guns. Who do you shoot? They are all co-workers or fellow students, including the actual psycho. Did you actually see the first shot fired? Are you sure who it is? And if you fire and miss, killing an innocent student, are you guilty of murder or what? And is this whole scene just a prank or is it real?

This infusion of guns will not only be increasing the number of unpremeditated shootings, also the number of tragic accidents, as loaded guns tend to go off for practically no reason.

3. And even if everybody, at every school in Canada has a loaded gun, then the psycho's plan "B" is to bring a bomb. Psychotic people have already bombed buildings, killing hundreds at a time. And not just foreign terrorists, Timothy McVeigh was an American army veteran. It has happened already, in Canada too, and guns are no defense against this tactic.

We don't have a final answer to this problem in Canada, but until we hear some logical arguments, or see something that proves guns actually help, we are betting that more guns is not the solution. So come on down that chimney, Santa, we won't shoot.
Copyright the Lost Motorcyclist