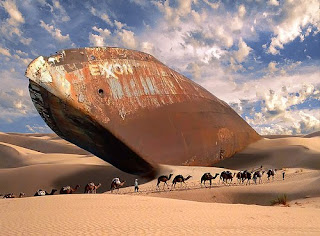 Here is a comment off the Internet about why we should not invest in alternate energy right now.

"Crude oil, next to water, is the most plentiful liquid in our globe. We are not in danger of running out of crude for at least 100 years — probably much longer. The supply during this period would be limited by the price, not by any metaphysical limit of the amount of crude oil. A higher price will produce massive amounts of crude. There is no reason, at this point, to impoverish our nation with a new system of expensive, unproven “sustainable energy.” Does anyone have any doubt that by 2100 we will have found new ways of tapping nature for our energy needs?"
by derekcrane

To me it does not matter whether we have more or less oil than water, or whether oil is second or tenth on the list of earth liquids, or even if oil is a liquid, gas or solid. However, an estimate of the number of years left is worth knowing, and although 100 years seems to have been picked out of the air, I'm going to go with it, as I have nothing better to offer.

Derek is quite right in stating that the price will dictate the amount of oil available. But is he aware that there are two sides to the price issue? Side 1. How much it costs. Side 2. How much you can afford to pay. Derek seems to ignore the affordability, probably thinking that America will always have enough money to pay for the oil no matter how much it costs.

It is very complicated calculating the real cost of oil. It's not just the cost per barrel on the market alone. It's how much more money was wasted, either in trying to obtain oil (whether successful or not), transporting and extracting the oil, in protecting your oil supplies, defending supply routes, or in trying to deny other people access to oil that you want for yourself. Also in trying to fight an evil dictator who happens to be sitting on top of the world's richest oil reserves. All these problems get worse as the oil gets more scarce, and more valuable. For example, the more an oil tanker is worth, the harder pirates will try to capture it.

Was the war in Iraq priced into the cost of oil in the US? Then oil would cost a lot more, but instead the cost of the war was largely assigned to a military budget, and paid for out of the general tax pool. Which means basically money was borrowed from China, because the US tax pool does not want to pay for anything. If an unlimited supply of oil was available in the US, maybe the war would not have taken place. If oil was cheap, Saddam would be no threat.

Another cost that is not being calculated is the cost of global warming. Maybe that cost will turn out to be zero, but it would be prudent to budget for it anyway, starting now. Lets say the US military is right in it's estimate that global warming is going to cause a big (and expensive) security threat. That cost is not being assigned to oil right now, but it probably should be.

As oil gets harder to find, it takes more oil to produce the oil, so the price does not go up linearly, it goes up exponentially. In Canada's tar sands, we may already be operating at less than 50% efficiency, where two barrels of crude are burned to extract one barrel.

Not only is the price of oil going up, but your buying power is decreasing. In fact, already America does not have enough money to pay cash any imports, including oil, imports are financed by borrowing. It takes years to build up a debt but the lender (mostly China) can pull the plug in minutes when they think they no longer need you. At the point where your loans are called in, you no longer have enough credit to continue importing oil. When that happens, do you really care whether or not there is any oil left?

The world used to have lots of alternate sources of energy, but the exploitation of oil has just about eliminated any competing energy source. That's because oil has more bang for the buck than anything but atomic energy. Other energy sources, such as hydroelectric, solar, wind power are at least ten times as dilute, which makes them expensive and non-competitive. Especially so when so much of the secondary cost of oil is being hidden in military budgets and government subsidies.

Why should we invest in alternate energy starting right now? Because if we do nothing now, we are wasting time we will need to develop new technologies. Waiting till the last minute (even if it is more than a hundred years from now) and hoping for the best is not a good plan. Right now we can afford to do the research, and we have unemployment since all our manufacturing process has gone to China. We would not really miss the money invested in developing alternate energy sources, or in reducing our energy consumption. Using a word like "impoverish" is quite an overstatement for a country that spends billions of dollars a year in useless doodads from China, that get tossed in the landfill within weeks for some new toy.