Solving the Gun Problem Just in Time for Christmas 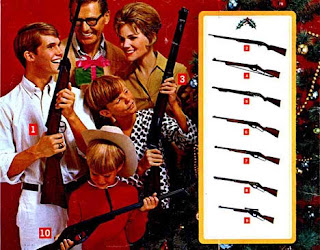 I feel bad that yesterday I was not able to give a solution to the problem of the shooting sprees, although I had just finished bursting the bubble of one of the most cherished solutions. To make up for it, today I am going to give an even better and cheaper solution than arming every schoolroom in the country, and I'm going to wrap this one up for you to open tomorrow, which is Christmas day. I know it's last minute, but that's the way I roll.

Here is how the solution goes. Ever notice how, in almost every case the psycho could have been stopped beforehand? I think every one of the psychos made threats well ahead of time. Yet no one ever did anything, because psycho behaviour is actually considered pretty normal. Here's your solution. If normal people toned down the rhetoric a little, the real psychos would be much easier to pick out ahead of time. It might not be 100 percent, but some lives could be saved, and at very little cost, too.

One example is a Canadian who was reading a British website and noticed psychotic behaviour. He immediately placed a phone call to the local police in Britain who picked up the psycho and averted a disaster. And yes, they found physical evidence that this psycho had all the equipment needed to carry out his threats.

It might even be possible to turn down the rhetoric with just half the effort that has been made to arm every classroom and workplace. To start with, it would be easy to insist that national TV networks stop calling for assassinations. I believe Fox News strongly hinted that a certain doctor who performed abortions deserved to die, and then some psycho obliged. Then, the Christian Broadcasting Network has called for the assassination of a democratically elected head of state whose only crime was to insist on a bigger share of his country's oil revenue, which he subsequently used to raise social benefits for the poor. And not only that, also offered to use some of that money to help poor Americans. In another event, a Christian minister hinted publicly in his sermon that Obama should be done away with, and next day one of his flock took a loaded gun to welcome Obama to town. Then you also have books, for example, "America Alone" by Mark Steyn, that "predicts" genocide for Muslims. This same book proudly proclaims on its cover "Soon to be banned in Canada". For obvious reasons.

It is realistic, and possible to tone down the rhetoric. We have done it in Canada to a large degree. While Obama gets 30 death threats a day, Prime Minister Harper's "Death Threat" inbox is empty. Try Googling "Barack Obama" and "Death Threat", you get 300,000 hits. The same search on "Stephen Harper" will get only 17,900. And half of those pages refer to threats made by Stephen Harper.

Start with the responsible people, the public figures and celebrities first. Let's all get together on the logical side of this topic instead of the usual emotion based left vs. right. Let's agree that guns and killing does not solve every problem. Wasn't it Jesus who said "God rest ye merry gentlemen and put those guns away. Remember I, your saviour was born on Christmas day!"? A Christian nation should be able to live up to those simple words.
Copyright the Lost Motorcyclist