Genesis of a Shade Tree Mechanic 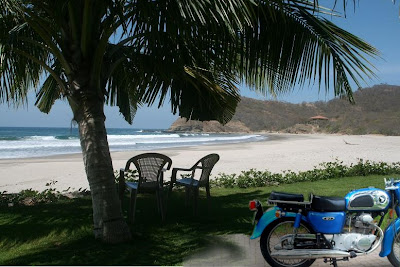 A shade tree mechanic can be defined in two ways

1. A person willing to perform repairs and maintenance on their own vehicle, usually with only a tree for shade and a small portable tool kit.

2. A person who, while trying to fix their vehicle, causes more harm than good.


I have described myself as a shade tree mechanic for almost 44 years now, since my first tune up job on my first bike.  I was reminded of that today, when I did a valve and timing adjustment on my red 1969 Honda CD175.  The first tune up I did was early January 1970, about 44 years ago.  It was also under a shade tree, like today, and also performed on the same year and model of motorcycle.  The main difference was that in 1970, I had never done anything like it before.  Also, then, I was 200 km from my home, which at the time was in Sierra Leone, West Africa.  And I had only the as-yet-unused tool kit from the new bike, and the owners manual, which included two small pages on how to perform these adjustments. If I screwed up in any way, I was quite far up s-h-double hockey sticks creek.

In early January 1970 was attending a workshop at Milton Margai Teachers College in Goderich, Sierra Leone.  The college dorms were right near the beach.  I had travelled to the conference with my new bike.  And while I was there, the odometer read 480 miles, and according to the book I had to do a tune-up.  Being a bookish person, I could not imagine waiting until I got home, when it would be reading over 500 miles.  So as everyone else left by taxi and bus and lorry, I moved my bike under a nearby shade tree, overlooking the beach, and got my tool kit and owners manual out.

The setting was about as idyllic as anyone could imagine.  I didn't take any pictures, as my camera got broken as a result of a poor packing job on my new bike.  But I have attempted a photo-shopped picture, showing a tree and a similar bike together, with a similar beach in the background.

I took stuff apart, following the directions in the owners manual. All the tools were included, even the .002" feeler gauge.  It probably took an hour, and when I put it all back together, the bike started right up.  To say I was relieved would be an understatement.  It would be accurate to call this a life altering moment.  I know people misuse this term all the time, but this was the real deal. I was 21, and after pretty much a lifetime of going to school and generally mucking about, for the first time I found out that I could actually do something real.  Anyway, I thought it was real, and that's what counts.
Copyright the Lost Motorcyclist