Ride It To Port Dover Like You Stole It. 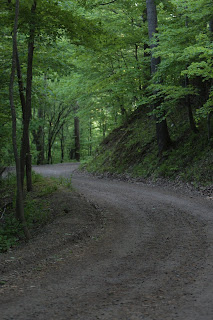 I have heard this strange expression "Ride it like you stole it".  Today I tried to  figure out what it means.  I assume the scenario is this: you  come across a random motorcycle with the key in it, jump aboard and take off without doing the 12 point pre-run safety inspection.  Due to the spontaneous nature of the ride, you also do not take the gear you will need, like a full water bottle, a rain suit, and a tool kit.  Of course, you do not perform a tune-up on the stolen bike before firing it up, nor do you add air to the tires.  Then you ride mostly at top speed without regard to engine longevity, or safety.

Another thing you would not do, if you were stealing the bike, is plan out a circular scenic route, ending up back where you started.  But actually, I did just that.  I left Kitchener and headed for Ancaster first, on my way to Lake Erie, then back home.  Just before Ancaster I went on Weir Road and Sulphur Springs Road.  These are good roads for a reckless rider on a Honda CD175, as they have hairpins and some gravel sections.  And if I dump the CD175, who cares? 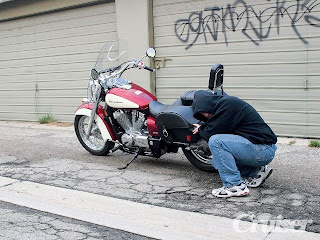 What kind of clothes does a bike thief wear?  I would expect a bandanna to hide your face, and a black hoodie sweatshirt.  Probably not a construction worker's safety vest, but then again, I might do that just because who would ever expect a person in a safety vest to be stealing a motorcycle?  It's the perfect disguise.

After getting back on track with Google maps, I headed for the bridge over the Grand River at Cayuga, and soon after, took Kohler Road down to pick up the scenic Lakeside Trail heading for Port Dover.  This is not a walking trail, it is a car trail.  There are signs along the way to keep you on track without having to stop and use your i-phone at every turn.

At Port Dover, it was time to eat, but there was no parking left at Tim Horton's.  Instead I stopped at Willy's for a Willy Burger, fries and a Coke. Normally, I should be looking for a nice healthy meal, but a guy who was worried about healthy food would not be stealing bikes, would he?  Also, there was a free motorcycle parking spot nearby, where I could hide the hot bike among all the Harleys outside Clare's Harley Davidson Shop.  Unfortunately the 44 year-old Honda 175 managed to called some attention to itself even in that crowd of shiny hogs.  After my meal on Willy's patio, I was ready to head home. I slowly put my helmet and safety vest on, then backed up and started jumping on the tiny kick starter.  When I turned around, I saw a crowd of Harley riders gathered around me.  I guess they had never seen a kick starter or a stolen bike before.  So I got going before anybody decided to call the fuzz.