Shopping for Rain Pants, I Buy a 2 Piece Rain Suit 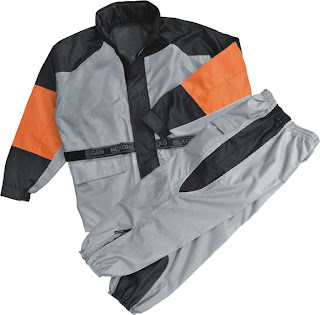 After getting caught in a couple of downpours this year, I discovered that my rain outfit is not as good as I thought it was.  I have several rainpants, but none of them really suit me any more.  For one thing, my Vulcan 900 does not have lower leg shields, and that puts extra burden on the pants to keep the rain out.  Also, my new motorcycle boots are bigger (size 12), and have large soles that are hard to push through leg openings.  Finally, I am not as limber as I used to be when I bought some of these pants, and I often strain a muscle while dancing around trying to insert my second foot.  (The Lost Motorcyclist was 45 when he (I) bought one of these pairs of pants, and now I'm 65).

I have three pairs of rainpants. I have my 20 year old rainpants that are waterproof, and non-breathable, but I can't get them on easily.  Then I have a pair of Coleman walking pants, fairly easy to get on, but breathable and therefore not very waterproof when riding on my Vulcan 900.  Finally I have some Belstaff cold weather pants that are sort of waterproof, really easy to get on with a full length zipper, but bulky and hot for summer riding.

After looking about on the Internet, I realized that the only way to buy a new pair of rainpants would be to visit a store and try to get into a pair, while wearing my motorcycle boots.  Lately I have had some luck finding quality gear at low prices at the Tri-city Cycle Clearance centre, in "The Southworks" in Cambridge.  So I put on my normal summer touring gear, including the size 12 boots, and went to try on some rain pants.

The only rain pants they had were part of a package, either a one piece suit or a two piece suit.  At $67, the price of the suits was about the same as I might pay for a good quality rainpant alone somewhere else. And I already saw on Google, that it was not so easy to find good quality, separate rainpants for motorcycling.

The first suit I tried on was a one-piece Bering suit, and I tried the largest they had in the store, which was size L.  Although I managed to get my feet in (a bit of a struggle), I simply could not get the top of the one-piece suit over my motorcycle jacket without help.  Next I tried a camo two-piece suit that looked pretty cheap, with no nylon liner. Struggling to get my second leg in, I strained a muscle, which disqualified that suit.  My last try was a Nexgen XXXL suit, which I managed to get on without too much difficulty.  (Although the leg zipper is short, and the boots kind of stick to the mesh liner and try to drag it inside out.)   As I was getting tired, I did not press on with the shopping.  I simply took an XXXL silver-grey/black/orange combination that actually would look very good if it wasn't for the size.  In a XXXL size, I kind of look like I'm wearing a balloon shaped poncho.  But at least I don't look fat in it.  I will make the observation that Nexgen makes these suits in sizes up to XXXXXL. The XXXL is big enough that no one could really guess how big I might be in there.  Other than the gigantic size, the only thing that bothers me is how bulky the suit is for packing.  It's made of thick textile, with a liner, and the jacket and pants together fill up more than half my left saddlebag.  I have only done one road test so far, and all I know is that the legs begin to flap strongly at about 120 kph.

Now to wait for the next rainy day and take a ride on the 401.  If the suit is really, really good, it might scare away the rain and start a new round of droughts for southern Ontario.

Picture: The Nexgen 2-piece rain suit with suspenders, pockets, a liner, and a high collar with built in under-helmet hood.  Waterproof/rain prevention qualities as yet unknown.
Copyright the Lost Motorcyclist