Getting Caught in the Rain on a Motorcycle 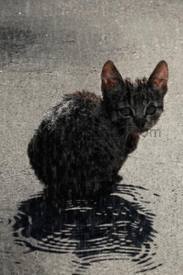 I admit that I am not the expert in staying dry, I do not live in British Columbia or England.  But in some ways it is more difficult to stay dry when rain is unexpected.  My first experience with rain riding was extremely shocking.  I had been riding a motorcycle for five months by the time May 1970 came around.   It was my first year in West Africa, where there is a rainy season and a dry season each year. For five months, I had been riding my motorcycle all over the country without any concern for rain, or even cold.

The day I first experienced rain on a motorcycle started out like many others.  I was at the beach for the weekend, and travelling the 200 km. back to my home on a nice Sunday afternoon in May.  About 30 km from home, a sudden thunderstorm came up.  I was wearing a helmet, sunglasses, T-shirt, regular shoes and jeans.  No face shield or windshield, no gloves.  No spare clothes, and of course no rain suit. I had not seen a drop of rain for about six months, and the temperature had been 31 degrees every day.  And, as I said before, I had never in my life ridden a motorcycle in rain.

The first drops of rain that hit me were a big surprise.  It was like being hit by rocks!  I thought about it for a short while.  Was this hail?  No, it was just raindrops.  I slowed down, and that was a bit less painful.  Within a few minutes, the rain was coming down very heavily, and I was soaked completely through and through.  Then the gravel road started to fill up with puddles.  Every puddle almost blasted my feet off the footpegs with the spray. It wasn't too long before the road started to get muddy, and the mud started getting slippery.  Luckily it was a short storm, and within about 20 minutes the sun was out again.  The temperature felt like it had dipped to about 70 degrees during the storm.  Then within another 20 minutes, I was almost totally dry, or at least comfortable again.  Just wondering what had hit me back there.

Many years later, riding in the summer in southern Ontario to me is mostly like being in a dry season.  This year has had more rain than usual, and quite heavy at times.  So how do you prepare for this kind of rain?  I have a windshield and splash guards for my feet.  I usually bring a rain jacket, rain pants, rain mitts, and boot covers with me.  Then I use my smart phone to check the weather radar, so that I know when to put on the rain suit.

A couple of days ago, I was on the 401 and I knew an intense rain storm was coming towards me.  So I stopped early, while it was still dry and put on my rain pants and jacket.  I don't bother with the rain mitts or boot covers.  Right where I expected it, the rain started, and it was really intense, some cars were pulling over. But my visibility was good, so I kept going, and I was only 15 minutes from my destination.  At my Mother's house I had a spare set of clothes if I needed them.

In the rainstorm, the first breach of the defences was my neck.  I had made the mistake of wearing a hoodie under my rain jacket.  The hood was sticking out, and apparently wicking cold water into my jacket.  About ten minutes later, I started to feel cold water from the front zipper area reaching my crotch.  When I got in the house, I changed my clothes and found out that my pant legs were half wet because of the "breathable" rain pants flapping too much.  Also my socks were damp, but this was actually better than I expected, as in a previous rainstorm, my boots had actually filled with water.  These lace-up boots are not advertised as waterproof, but they work surprisingly well as long as water does not run down my leg into the boots.  My T-shirt was mostly dry except for the lower front.  My gloves were completely soaked, but at least no black dye had run out to colour my hands.  And overall I was warm enough, because of the time of year, even though I was a bit wet.

But I have now changed my breathable rain pants to old fashioned PVC.  And next time, no cotton hoodie will be sticking out in the rain.  Always striving to do better.
Copyright the Lost Motorcyclist