Tmmy's in Port Dover After Midnight 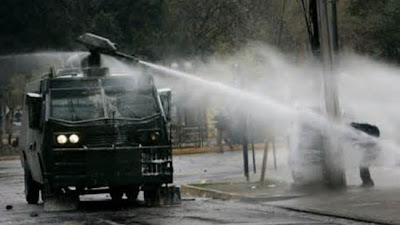 Looks like the weather will be warm and dry for a few weeks.  I just bought a new rain suit (maybe that explains the sudden change in weather), and so far I have been forced to test it with a garden hose.  To make the test more realistic, I sat in one of our lawn chairs and had Mary Ann spray the hose at me from the front.  She doesn't like wasting water, so she insisted that I move my lawn chair to the middle of her vegetable garden, where the runoff could do some good.  At first she was reluctant to use the full force of the hose, but as the suit seemed to hold up well, she gradually got enthusiastic with the test program.  Maybe she enjoyed it a bit too much, but at least whatever was covered with the rain suit stayed dry in that test.

A garden hose is different from rain in many ways.  On a motorcycle, the rain will be hitting you at higher speed, over a longer period of time, while the garden hose hits you with a huge amount of water at lower speeds (even on maximum force), and over a shorter period of time.  Unless you're willing to sit there and shoot water for four hours, which I'm not.

Actually, there has been a small leak on the right knee that I have been trying to seal with wax.  Although the suit has sturdy nylon material, it also has many seams, including six on each knee.  They are not double stitched, and the tape seal on the back of the stitches is kind of sloppy.  Still it's quite a small leak, so I should be able to find it and seal it one day, if I keep on with my testing.

PORT DOVER
Last night at about 10 PM I was struck with the brilliant idea of riding my bike down to Port Dover for a midnight hot chocolate and toasted cinnamon raisin bagel at Tim Hortons.  It also happens to be the 30th anniversary of a 35 hour overnight ride I made when I was 35 years old.  Except for a nearly full moon, conditions were similar.  Hot and dry during the day, clear and really cold at night.

My 2007 Vulcan 900 was ready for the trip,  and in many ways it resembles my bike from 30 years ago, a 1982 Honda Silver Wing 500.  The Vulcan has a bigger engine, but not much more horsepower.  Both are water cooled V-twins.  By coincidence, my Vulcan had no windshield last night, and neither did the Silver Wing, which turned out to be very important.  The only obvious modern technology my Vulcan had, that the Silver Wing could not match, was fuel injection.  Surprising, considering 30 years of technological advances.

I started the ride at about 10 PM, wearing only a t-shirt under my riding jacket, and kevlar pants.  But I had a secret weapon with me that I did not have on my 1983 trip to Baie Comeau for breakfast.  In my saddlebag I had my new rain suit.

I started to get cold before I reached the end of my street, so when I stopped for gas a bit later, I zippered up the front vents on my jacket.  It was still 19c and warm from the daytime sun.  But within another 15 km., the cold was increasing, so I stopped again and put on my sweat shirt.  That arrangement held me until I got to Port Dover, where I was kind of chilly, so I ordered a hot chocolate and toasted bagel.

On my return trip, the temperature was down to 16c. Out in Timmy's parking lot, I put my rain suit over everything else I was wearing. By the time I got home at 1:30 AM, I was still warm, even though wisps of fog were developing on the road.

I underestimated the cold because I'm used to riding with a windshield. Also, I am not used to riding when the temperature is dropping rapidly, like it does on a clear night in August.  Similarly, back in 1983, I had no windshield, as I had not yet bought a windshield for it.  I did soon after that overnight ride, though.