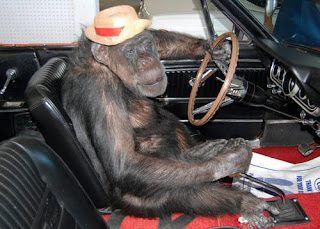 I like reading motorcycle magazines, and I have been reading Cycle Canada for forty years. In fact this year, it is publishing it's fortieth anniversary editions. Under the new editorship of Neil Graham, Cycle Canada seems to once again have regained its top form.

In this issue, I found many interesting bits of reading, which I won't bother getting into. But one letter to the editor got me thinking. I have often complained of the bad drivers in Canada, especially southern Ontario, where I have lived for the last 30 years. This letter was from Asif Ikram, who recently moved to Oakville Ontario, from the UK, and is commenting on incompetent drivers and unsafe cars on the road, and wraps it up with "I'm sure a trained chimp could get a licence here."

To that I would say, the worst I have ever seen here was a dog driving a minivan. No I don't know what kind of dog, I only had a brief look as he (or she, I don't want to be sexist) went by at about 100 kph. But I'm betting the dog has neither a licence nor insurance. Which brings up another point, that Asif may not be aware of. I think I read somewhere that the police estimate 30,000 drivers in Toronto do not have a driving licence. It happens all the time here, friends of mine tell me they know people who do this. So the issue is not about giving driving licences to trained chimps, it is getting the unlicenced trained chimps off the road. And because these chimps look so much like humans, it's hard to do. Besides, what's the difference if people are driving and reading magazines or texting on the cell phones anyway? I would prefer the chimp, if the training included not reading or texting while driving.

Of course accidents will happen in Canada, but they also happen in the UK, in fact everywhere. It seems to me that every time you go to a new place you have to get used to subtle differences in driving style. At first these differences may seem like incompetence, but gradually you realize it is a different culture. Even between Quebec and Ontario you find differences in driving style. In Quebec it's more aggressive and faster. In Ontario it's more about multi-tasking while driving and hogging the fast lane. You just have to get used to these differences as you drive from one place to another.

I have not spent a huge amount of time in England, a total of probably less than six months over the last 50 years. But during those six months I was involved in two accidents and one near miss where an oncoming driver forced me to go onto a lawn to avoid being hit head on. (very freaky for a guy who is not used to driving on the left, but I was on the correct side of the road for England.) In the two actual accidents, I was a passenger in a friend's car, and a passenger in a bus. I have only been involved in one accident in Canada. Someone making an illegal u-turn wrecked my car, and another unreported incident was slight touch on my back bumper at a stop sign . So just by my personal experience, you would not be able to prove Canada had worse drivers. But for sure, in the UK on a freeway, I never saw drivers hogging the fast lane like they do in Ontario.

The second point was about rusty cars and cars that should not be on the road because of mechanical issues. Remember, we have salt here, we are more used to rust than Brits are. Asif also commented that in the UK, they have safety inspections "so rigorous that three year old cars routinely fail", well I for one would vote against that kind of inspection in Canada. Who in their right mind (other than a safety inspector with a nice steady paycheck) would want that? Or, maybe a more interesting question, what kind of cars do they sell in the UK?

Finally, yes, there is one place where the competence of British drivers is clearly demonstrated. Recently we had the "Toyota Scare", where Toyotas were accelerating into fatal accidents, and the drivers claimed it was the car's fault**. Now that the investigation has been completed, it seems conclusive that it was all driver error. But this happened only on our side of the pond, although Toyotas were also sold in the UK. Maybe Asif does have a point about our incompetence.

** It may sound contradictory that a driver in a fatal accident says it is the car's fault, but in the most famous case, the driver phoned 911 to complain about the car's acceleration seconds before the fatal crash.