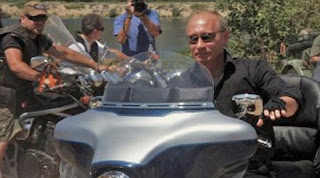 I'm noticing Russian propaganda now features a biker gang (kind of a Russian Hell's Angels) called the "Night Wolves". The best I can figure is the club is about 21 years old and has about 5 thousand members. There are chapters as far away as Serbia, I don't know where else they are.

Although nobody gives a lot of thought to Russian propaganda any more, the Russians are still active propagandists. There is a Russian news network in English, that hammers away at the U.S. every chance it gets. I watched a couple of their videos from last year, and found them quite well done. They focus tearing down the very thing that America is most proud of, the rich lifestyle.

It seems to me that the Russian message, while it is polished and well focused, is not really making any impact. The Russians are yesterday's news. There is far more world wide interest in the conflict between Muslims and the US.

Picture: Putin on a Harley from this Russian Blog.

If you understand Russian, take a look at the Wikipedia entry for Night Wolves and tell me what its about.