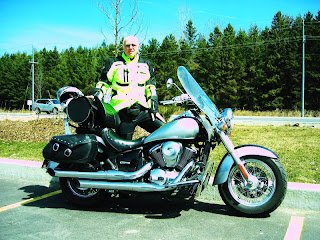 Today was my first motorcycle trip to Port Dover of the year 2011. It was a sunny day, at about 13c was almost too warm for my usual gear, so I removed the throat protector collar from my jacket.

There was one major difference from 2010 "en route", a new Tim Horton's is open, Rest Acres road on the south edge of Paris. We started the trip at the Rest Acres Tim Horton's. I ordered my lunch as usual, but there were no trays to put it on. I was just going to ask for one, when the woman behind me asked for one first. The cashier pulled out a tray and put it on the counter for her. Then I asked for one, and she had to walk to the other side of the store to find another one. Most Tim Horton's have a place to stack trays right at the front of the counter. I just can't figure out, with over 3000 Tim Hortons built by now that they still can't seem to get each new one right. It's not like they are built by people who have never seen a Tim Hortons before! Ooops looks like I'm ranting. That often happens when my blood donut levels get too low, like right now.

I was so distracted by the tray incident that when I left Tim Hortons, I forgot to roll up the rim of my decaf to see if I won a new Toyota Venza.

While Barry was leading we got lost on the way to Port Dover. With the number of times I have driven to Port Dover (over 30 times last year), I thought that would be impossible. Even though my blog name is "The Lost Motorcyclist", I don't really get lost that much. But we ended up on a road I had never seen before heading south, between the old highway 24 and Cockshutt Road. It was paved and narrow, and actually had two curves and a bridge on it. So getting lost was actually the best part of the trip, as we had no urgent deadline for getting to Port Dover.

Then Barry had to stop for gas, and complained about the price. I told he shouldn't have to worry because his 150cc Kymco Scooter only takes about 2 liters per thousand kilometers. But Barry insisted the thing needs ultra high test gas, which was $1.41 per liter in Waterford, compared to about $1.27 for regular, which is the type my Vulcan 900 takes. So I guess for Barry that works out to about an extra 15 cents a year. Meanwhile the Venza I just lost was probably worth about $30,000, but do you hear me complaining?

The parking lot at Tim Hortons in Port Dover, and at the abandoned restaurant next door were both full of bikes. Mostly Harleys, but we did talk to one guy on a Suzuki GSXR750, who had a "Suzuki Sucks" sticker on the front fender. I asked him to explain this curious sticker, and he said he was supporting a friend of his who bought a Suzuki Hayabusa that was a lemon and the dealer didn't refund his purchase price. So the friend made up a batch of these stickers and passed them out to anyone who would put it on their bike for him. I guess that'll teach the Suzuki dealer to mess around with a guy that owns a custom sticker business.

Picture: At Tim Hortons' on Rest Acres Road. The colours are a bit off because I think the bright green on my newly cleaned jacket must have maxed out the colour balancing meter in the camera. I'll have to start taking pictures in the shade.
Copyright the Lost Motorcyclist