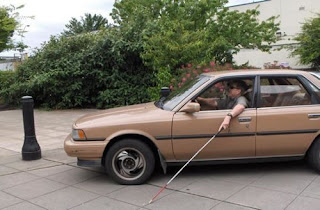 There is an old adage "There are none so blind as will not see". Recently this quote was used in a response to one of my blogs, citing Jonathan Swift as the source. The saying refers to a person who refuses to see the truth, who is "blinded" by something. The "blinding" could be as a result of many things, for example: education, parental values, patriotism, habit, stubbornness, fear, or hate.

Another commenter responded that even if this adage applies to a given controversy, it is impossible to know which side is the one that "will not see". I wanted to investigate whether there is indeed a pure symmetry in the statement of who "will not see", or if there are some characteristics that would lean the "will not see" to one side or the other.

Swift's quote was used as cliche in polite society. The idea appeared in the Bible, too, where you were told to remove the plank from your own eye before you tried to remove a splinter from another person's eye.

When I looked up the quote by Jonathan Swift, I found it in "Polite Conversation". Jonathan Swift in his typical ironic style, explains in the introduction that he is writing a book that captures all the witty repartee (and apparently cliches too) of "Polite Society".

Lady Answ. They say, she's quite a
Stranger to all his Gallantries.

Lady Smart. Not at all ; but, you
know, there's none so blind as they that
won't see.

Miss. O Madam, I am told, she
watches him, as a Cat would watch a
Mouse.

An upper class lady "would not see" that her husband was fooling around, even though everybody else knew about it. I guess we could generalize that as anyone in a very comfortable lifestyle, who will tend to ignore warning signs of serious problems they don't know how to deal with.

How can we apply this quote to the global warming debate? We are fond of our lavish lifestyles, with cars, SUV's, big houses, plentiful cheap energy all around. We would prefer to not think about what damage our lavish lifestyle is doing to the environment. We would prefer to not think that our need for resources causes wars even as it creates pollution and waste. So we turn a blind eye to the bad side, and continue consuming more and more, ignoring anyone who tries to warn us, or tell us anything that might burst our bubble.

So if we look at the environmental controversy, it is not actually symmetrical. Both sides would prefer in their hearts to believe the same thing, that pollution, global warming, overpopulation etc. will never cause a problem. The one "uncomfortable" side of the controversy is to believe that something is going on that we must take difficult steps to prevent.

So in this controversy, I believe we can all agree that one side of the argument is the preferred side, the other side is the uncomfortable side. One side is the one we desperately want to believe, the other side, if we believe it, can make us unhappy, and may force us to do something about it.

Global warming deniers fall into two camps. One is to believe that there is no global warming, that this is all cooked up figures by rogue scientists to try and get grants, or to impose a socialist government. The other view is that yes, the earth is warming, but this is a natural process, and there is nothing we can do about it anyway.

With the two denial camps I have referred to, "There is no warming" vs. "Warming is natural", it is amazing to me that most people I know believe both arguments simultaneously, which strikes me as illogical. But I guess they're really saying "Hey nobody really knows anything for sure, so I can believe both at the same time"

Although there are warning signs, deniers would prefer to either ignore them, or blame everything bad on socialists or environmentalists, or just Al Gore. We would ignore warnings rather than than scale back our God given lifestyle to any degree. We would rather deplete our oil supply than begin developing renewable technologies that may prolong our civilization. Instead of exercising caution, we write articles about how caution is overrated.

Like the upper class lady with a cheating husband, even when we really do see disasters happening, we often "do not see them" and carry on as usual. Two recent examples, the 2008 economic crisis and the BP oil spill, the multi million dollar bonuses paid to bank executives who nearly wrecked the world's economy, and more recently multi million dollar bonuses paid to oil executives involved in the spill. Apparently there is no disaster big enough to force comfortable people into a reality check.

I believe that the expression "None so blind as will not see" is appropriate for global warming deniers. It does not prove that global warming exists of course, merely that the deniers are the ones who really should ask themselves if they are on the side of truth, or if they have succumbed to the common human failing of refusing to see anything which is a threat to their comfortable lifestyle.

Picture: Blind driver off the Internet. Motorcyclists always say the car drivers are blind and are out to get you.
Copyright the Lost Motorcyclist