Romney is More of a Bullshitter than Obama 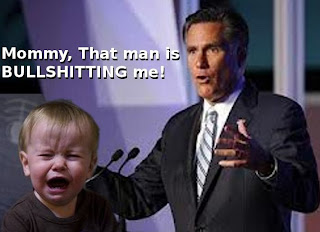 Actually, Barack Obama said that children have good instincts for calling the other guy a bullshitter. And then to put it in context, he made that statement after a small child had expressed support for Obama.  Which if you think about it a bit, means Romney has just been called a bullshitter by Obama.

Well, I think it really is bullshit when Romney keeps saying "I know how the economy works".  While it may not be a lie, it is certainly bullshit.  Nobody really knows how the economy works, it is too complicated. Romney does not know for sure that his extremist economic theories are right, and after those theories set the stage for the 2008 collapse, why does he want to continue with them?  Oh yes, I just remembered: those theories involve more tax cuts for the wealthy.

More bullshit when Romney says he saved the 2002 Winter Olympics.  That's because Romney "saved" the Olympics with government funding.  And Romney is running on a platform that is opposed to government funding.  It was the taxpayers who really saved the Olympics, and they should be given some credit.  Similarly, Obama did not really save GM and Chrysler, but he did fight for funding to get them restarted, which Romney would not have done.


Barack Obama is doing a little bullshitting on his own.  He is bullshitting about children having good instincts about liars.  Apparently there have been studies done, indicating children are easily fooled by bullshitters.  Also Obama once called himself "as patriotic as anybody" which is plainly a lie, as he didn't wear a US flag on his lapel and didn't put his hand over his heart during the pledge of allegiance.  If you want to see hundreds, if not thousands of other lies by Barack Obama, consult Google. (55,900,000 hits, including this one)

But two places Obama did not lie, was saying that Romney opposed the auto company bailout, and Romney opposed going after Bin Laden in Pakistan.  Obama succeeded in both, and now Romney is trying to take credit, which is my definition of a classic, if not pathological, bullshitter.

Picture: I made it with "The Gimp" a Linux photo editing program like Photoshop.

Translation: The Mormon word for bullshitter is "bu -double hockey sticks- shitter", in case that helps.
Copyright the Lost Motorcyclist