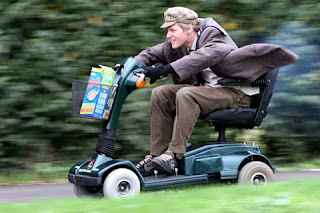 Today the Globe and Mail had an interesting headline: Why modern electric vehicles are like cars from 1905


I could not figure out what the headline meant, even after reading the article.  Anyway, one comment got me motivated to write a blog, it goes like this

"Electric cars will never replace the gas cars. Electric cars are for crazy professors and people like them that do not live in the real world."


I know many other people think the way Edgenet does.  So it's time to have a public service lesson in how an average Canadian uses a car.  I do not wish to argue that electric cars will completely replace gas cars.  But they will be increasingly creating niche markets alongside gas cars, where a family may own one of each.  So instead of owning three gas cars, a family may own two gas cars and some kind of an electric vehicle.  Electric cars are not just for crazy professors and people who don't live in the "real" world.

Although I don't have statistics in front of me, I know that many Canadians are turning to electric four wheel and two wheel vehicles to get around.  The four wheel vehicles (also called mobility scooters) are often used to go to supermarkets for shopping, and can in fact go right inside the mall or supermarket, because of their electric technology, and because their owners have great difficulty walking.  You may not want to call these things "cars", but they use the same technology, and they perform the function that a car used to perform, but do it better.  Their batteries and charging systems are adequate today,  to accomplish the goal of shopping.

A second use for an electric car, this time a more conventional electric car, is getting kids to school.  School busses do not carry all the kids, for proof you only need to go by a school at 3:00 to see all the parents waiting for the kids to come out.  Those people drive their kids to school or back four times a day, with a cold start each time.  And it is getting to the point where some families have a minivan that is only used for this one purpose.  Toyota is having some problems with engine failures in minivans whose oil turns to sludge and burns out the engine, because the vehicles never get operated for more than 15 minutes at a time. So the engine never has a chance to get up to operating temperature.  Families who use a minivan like this, usually also have huge four wheel drive pickups and SUV's that they use for longer trips, relegating the minivan exclusively to school shuttle duties. It would make a lot more sense for this type of work to be done with an electric vehicle, that needs no oil changes, no gas fillups, no warmup time, and does not burn out the engine on stop and go driving.  200 mile range and top speed of 100 mph are not needed in this application.  Just plug it in at home and drive around the block when you need to.

I don't necessarily agree with driving the kids to and from school four times a day, but I'm just observing the "real" world that I see developing around me.

Picture: Taken from this website "EV World The Future in Motion"