Getting New Boots at the 2013 International Motorcycle Super Show 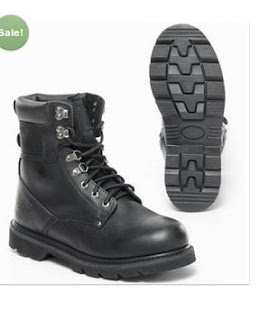 The January 2013 International Motorcycle Super Show started today at the International Centre on Airport Road in Toronto.  I went down alone so that I could do some intense shopping.  I was looking for winter motorcycle boots, but actually nobody seems to make "Winter" boots.  All I really needed were boots that met my requirements for cold weather riding.  They had to have a non-slip sole, in case I plant a foot on ice or snow while pushing the bike near my house.  Also, I wanted something made of leather for protection, with maybe some built in ankle armour like typical motorcycle boots.  If they were not already lined with insulation, I needed some extra room inside for layers of thick socks.  And I also like a padded insole.  I need boots that are at least 8 inches high (from the top of the sole), so that there will be no bare leg exposed between my pant cuffs and the boot tops while riding (very important).  Also, I want the boot tops narrow enough that my jeans can fit over them. And of course, I would like to be able to walk moderate distances without them falling apart or causing blisters.

I avoid riding in rain in the winter, so the boots don't have to be waterproof, and anyway, I can apply Nikwax to the exterior, and wear Goretex socks if I need to.   My final criteria include NO high heels (like cowboy boots), no platform soles, or weird graphics, dangly bits, or colours (I don't mind tan, brown, or black).  And the very last thing, I need to be able to get them on and off without the help of a batboy or a footman.

So, after all that you may think I am very fussy and I might have to pay a lot for these boots, but actually you can get military surplus boots that could work for only about $25 slightly used, so I was hoping to find what I wanted for about $100 at the show.

I have been to the show many times in the last thirty years, but now it occupies all five halls of the International Centre, and that is really too big for me to comprehend any more.  Because of the confusing layout of the halls, and without a map of the show, I kept getting turned around. I was almost ready to start laying a trail of M&M's behind me so I could find my way out or at least find my way back to the place with the best boots.  I stopped at two places to try on boots before I found the huge zone reserved for "GP Bikes" of Whitby.  They had a good selection of boots, and I was drawn to one style from Altimate for $99.  The box says "Canadian Style", but the Internet says the boots are actually "Cruiser Style" in other countries.  I was already prepared, wearing a pair of bush socks over my thick hiking socks, so I tried the boots on.  The boots are EE width, according to the Internet, which suits my heavily socked feet.

I bought the Altimate Cruiser boots, and as I was walking around carrying the boots in a bag, plus all my other free show goodies, I realized how heavy they were, so decided to leave them in my car while I continued exploring.  Looking for an exit, I started seeing more and more boots for sale that I hadn't noticed before.  One booth had a sign "All motorcycle boots for $50 (sizes in stock)".  Another booth actually specialized in quality leather boots.  (Westway or Westwood I think).  I started avoiding looking at any more exhibitors with boots, because I can't handle the second-guessing after I made my decision.

After storing the boots in the car, I spent another two hours walking around the show just looking at bikes, and watching people checking out new bikes or new gear.  It's fun for me, but boring for Mary Ann, so she usually stays home, and anyway she was sick with a cold.  When I got home she went through my bag of stuff and considered herself lucky that I only got a pair of (cheap) boots.