Technology Could Make Canada as Liveable as Arizona 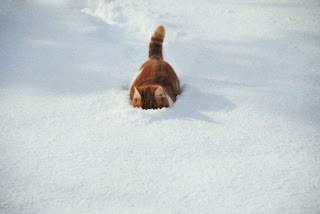 We have just had a really cold few days in Canada. Actually, it was almost like what we used to call "winter". It's time for the "Lost Motorcyclist" (i.e. me) to reflect on how the winter affects us in Canada.

With effective interior heating, Canada has become a much more comfortable country to live in.  At least, I imagine it is, because I have never lived in a house without central heat in the winter - although we did have a coal fired furnace when I was young, it was still "central" heating, with a square heat duct coming up from the basement furnace room to a massive grate in the living room hallway.  But after it belched flames into our home a few times, my mother insisted on replacing with an oil burner.

The next step in fighting cold in the winter after houses, was making heated cars almost universal and clearing and salting all the roads. Back in the early fifties, apparently the province of Quebec did not bother clearing roads between towns.  I say apparently, because we didn't have any provincial roads coming into town anyway.  Or a car. Now, in the winter time most people either stay inside, or sit in their cars, or shop in indoor malls, and you hardly ever feel cold.  Except when shovelling snow - even then some snowblowers have heated cabins.  It is to the point where some people don't even throw on a coat or hat to get in the car and drive to Sarnia, which is why it was so dangerous a few years ago when the 402 was shut down by a blizzard and cars were stuck overnight.

But regardless of all this comfortable heat we surround ourselves with, Canadians still have a tremendous desire to get out of Canada in the winter.  I don't need to say we "go south", because logically, any direction out of Canada is south.  That's because Canada is where the north pole is located.  Yes, I know we go north to get into Detroit, but that's just a geographic anomaly.  But I digress.  Canadians like to go someplace warm in the winter, like Florida, Arizona or Mexico.  Actually any other country on Earth is warmer than Canada, I just don't have time to list them all.

Why do Canadians want to go someplace else in the winter, even though we are so comfortable in our houses, cars, and malls?  Because we miss the outdoors is why.  We like to stand (or more likely, sit) out in the sun, without literally freezing our asses off.  I often go south in the winter because I miss being able to ride my motorcycle here. From November to March, sometimes weeks go by without me getting out for a ride.

Which brings me to the news that technology is being developed which might make Canada's outdoors as warm as Florida in the winter, and I'm not talking about global warming. I'm talking about heated clothing. Just as houses and cars with internal thermostatically controlled heat have made Canada more comfortable in the winter, now your outdoor clothing can have its own heater and thermostat.  The temperature inside a garment (coat, gloves, socks) can be set to regulate itself. And some of the latest heated garments have wireless remote thermostat controls.  They can be located more conveniently than fumbling around inside your pants at 40 below zero.  Also, the controls can, if desired, regulate the heat on separate knobs for vest, gloves, pants, or socks.

Heated clothing no longer needs a wire tethered to a motorcycle battery.  More efficient heating elements and rechargeable lithium batteries have made it possible to have heated clothing with portable battery packs. Although to be honest I have not tried this cordless battery operated setup yet.  Check out this jacket at Mark's.

It's just one more technological step in making Canada a livable place in the winter, and not just a playgound for polar bears.

Picture: You don't need another picture of me in my electric vest.  Much better is a cat out for a walk in the winter, taken from this website.
http://xaxor.com/funny-pics/29220-funny-cats-playing-in-the-snow-part-3.html
Copyright the Lost Motorcyclist