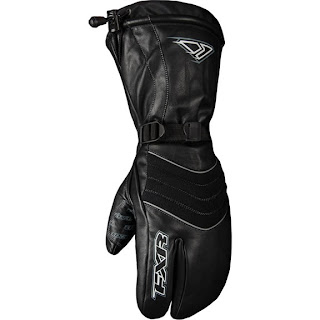 You can get cold hands riding a motorcycle in the winter in Canada.  About 35 years ago I found out that ski mitts could keep my hands reasonably warm, but you can't feel the controls very well.  So now, after many years of trying different types of hand wear, I am going to summarize what works for me.

Mitts are very warm, in fact they do not really need to be that warm.  My warmest mitts can potentially make my hands sweat at -10c while riding my motorcycle on the freeway.  Actually there are a whole range of mitts and heavy duty gloves out there, and ideally you should be able to find a pair that provides the best "feel" without letting your hands get too cold.

The feel of a pair of mitts or heavy duty gloves depends on the thickness of the padding, and the stiffness of the outer layer.  Also, the construction of the mitten makes a difference.  Some are made of heavy leather, others of lighter cordura textile, and some are a combination of both.  The mitt should be the correct size for your hand, as extra length will make it even more clumsy and can get hung up on the underside of a lever that you want to grab.  Not good if that lever is the brake in an emergency.

Unfortunately, there is not a lot of discussion about motorcycling mitts. Actually I don't find many mitts specifically for motorcycling. Right now I have five pairs of mitts - these are all the mitts I have bought in the last 35 years.  My first two pairs were leather ski mitts, and I got them so long ago that I don't actually remember why I bought both of them.  About ten years ago I bought another pair of leather mitts because they were bigger and warmer than the other pairs, they had a bigger gauntlet to go over the sleeves of my heavy duty winter jacket, and they had a removable liner.  They are too warm for -10c.  They are also the clumsiest feeling mitts I have.

My warmest pair of gloves can only go down to about +2c. That leaves me with a gap of twelve degrees between my big mitts and my heavy duty gloves.  Last year I saw a pair of mitts that was a compromise between gloves and mitts. They are mitts but with the index finger separate.  At first, I hesitated abut buying these gloves because I assumed I would have a cold index finger and why do I want to get frostbite on one finger instead of all four?  But I saw a pair of these "3 fingered" mitts for only $20, so I figured why not try them out?

The three fingered mitts actually kept my hands warm while riding at 2c, and even at -5c they were not too cold.  I actually could not tell the difference between the temperature of my index finger and the rest, which I find strange and I can't really figure it out.  So the concept seemed to work for me, but there were problems with the cheap 3-fingered mitts that I bought. After each ride, the mitts felt damp inside, and they need to be held over a heating register for 48 hours to dry out.  And that's without any rain or splashing from the road.  It turns out that they had a non-breathable waterproof liner under the nylon outer shell which was trapping evaporated sweat from my hands.  The liner was not removable, and the mitts could not be turned inside out to dry them off.  They could not be turned inside out because the liners were 5-fingered, and the glove was 3-fingered, and the liners were attached to the inside of the glove.  I'm sure there is a branch of mathematics that can prove why they cannot be turned inside out.

The other problem my 3-fingered gloves had was that they were very lightweight, and would provide almost no protection in a crash.  But on the plus side, they did feel more like gloves than mittens, while being warmer than any gloves I had.

So I went on a search for some heavy-duty leather three-fingered mitts.  Unfortunately, the leather mitts are about $80 to $200. Locally, they are available for snowmobiling, but even then, they are not available everywhere.  I found one pair at Royal Distributing in Guelph, called the FXR Leather Index Mitt for $110.  There was another pair at Crazy Al's in London, that cost under $100.  These were the Choko Leather Claw mitts. The main differences were in the removable liner, flexible finger bellows, and the arrangement of fingers (2-2 instead of 1-3).  I chose the FXR mitts because they were closer (in Guelph), and I didn't feel like riding all the way to London just to see if they had a pair in stock that was my size.  Also, they had reflective piping, and cleaner overall styling (in my opinion).  I don't know where the Choko mitts are made, but the FXR's are made in Pakistan.

Before I wrap up this blog, I should mention that there are lots of other factors affecting the coldness of your hands.  Some people have colder hands than others.  Also, if your body temperature drops, your hands will get cold no matter how much heat you put on them.  So having an electric vest can help your hands stay warm too.  My motorcycle has a windshield that protects my hands a little, and some windshield fairings have extensions that deflect wind away from the hands.  Finally, some gloves have internal electric heat, and some motorcycles have heated handgrips.  I like electric heat, but it's not totally reliable, and so I only use an electric vest.  There are also chemical hand warmers that some people use.  I once had heated grips, which are nice, but can't make up entirely for inadequate gloves.  I also tried handlebar muffs, but they are a pain to get on and off, and need an internal frame to clear the levers, and it's hard to get your hand back on the bars if you take your hand off the bars at high speed.