Is This Really Criticising Jesus? 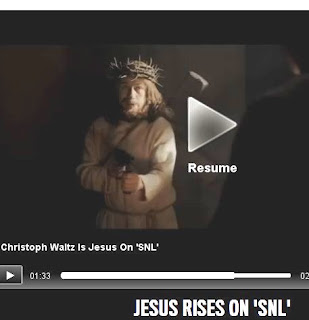 Quentin Tarantino's latest movie is Django Unchained, a revenge flick set in the times of southern slavery. On February 16, 2013, Saturday Night Live, hosted by one of the stars of Django, did a spoof on the film called "Djesus Uncrossed", where Jesus (or Djesus, or Jesus H. Christ with the H silent), came back from the dead to wreak vengeance on the Romans.

Was the SNL skit a spoof of the movie, or was it a spoof on God, or was it the most blasphemous skit ever in their history?  I'm sorry I missed that episode, but this skit is posted on the internet, here is one link.

In my opinion, this was not really a criticism of Christianity, it was first and foremost a spoof of the film.  And I have seen almost the exact same theme in a Jesus skit done on "Family Guy" in the episode "North by North Quahog" in the skit "The Passion of the Christ 2: Crucify This".  However, "Family Guy" has done a lot of other things the fundamentalist Christians hate.

For example (from this web page, showing how Family Guy is blaspheming Jesus)


A standing gag is that Jesus drives a Cadillac Escalade.
In "North by North Quahog", he is seen in the car in an action trailer for Mel Gibson's The Passion of the Christ 2: Crucify This and is portrayed by Jim Caviezel opposite Chris Tucker.
According to the National Gun Association's pro-guns film in "And the Wiener is...", Jesus  and Moses used guns to defeat the Romans.
During his second coming, shown in "Stewie Loves Lois", Jesus's stature is found to be short since science has proven that people were shorter in biblical times.
He also makes use of his powers to assist his golf game, as seen in Holy Crap. Although he is "Employee of the Week" at Happy-Go-Lucky Toys, he is on the golf course going for his fourth Birdie. He makes his swing, and the ball lands extremely close to the hole, on the verge of going in. Using his power, he gets the ball to go in.
In Go, Stewie, Go!, Jesus is on the side of the jocks in a dodgeball game against the meek.

So the basic line taken by Sean Hannity on Fox News is that Liberals are too chicken to take on the Muslims, so it's open season on Christians who don't fight back.

And, by the way, Fox News, "Family Guy" is a show on your own network, so how about attacking yourselves for blasphemy, instead of Saturday Night Live on NBC.