The Long Way Round: My Second Review 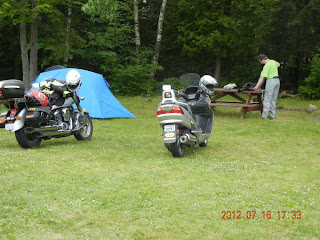 
These days, just getting my motorcycle to the end of our street is a chore.  We're having a colder than normal wave of weather over southern Ontario right now, and once again I'm itching to get out on my bike.  To make matters worse, I've caught a cold and don't I want to go out at all, on foot or in a car.

So with Mary Ann away visiting her aunt for a couple of days, I dragged out the old DVD "The Long Way Round" with Ewan MacGregor and Charley Boorman.  I've seen it already, twice I think. Although I rarely like to watch movies more than once, I can make an exception for motorcycles. 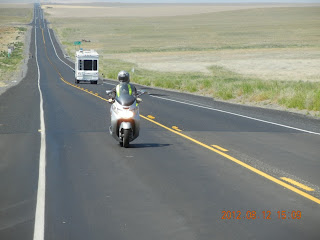 I have not finished going through it yet. Yesterday I got as far as the "Road of Bones" in a marathon session.  But I will confess to taking a few short cuts over the bits I am not too fond of. I might as well list them here.  I fast-forwarded the wrestling, the gasoline in the eye, the naked massage, the eating of the animal's testicular parts, and some scenes of the orphanages.  That doesn't mean I'm heartless, or squeamish... or does it?  Anyway I was sick, and I had a lot of time to kill, and I can't ride my bike, and this video managed to make me forget all those things even though it's the third time through some of it.

To break up my TV watching, I checked up on reviews on the internet.  I can't agree with some of the strongest criticism.  Namely, that these are spoiled rich and famous guys getting free stuff, taking a nice vacation with fully staffed and equipped support vehicles, and they were still whining endlessly about everything, and anyone could do it.  On top of it all, they are accused of rushing through the countries they visit, barely seeing anything or talking to anyone along the way.  That is not my criticism, but it seemed to be a theme on the negative internet reviews.  (I should mention there were many more positive reviews.)

This quote is from

The Long Way Round has been a blessing and a curse. Sure, it has created interest in adventure riding, but the programme gave a melodramatic impression of life on the road. Millionaire BMW salesman (and actor) Ewan McGregor had free bikes and equipment, an office full of support staff, a back-up truck for mechanics and groupies, and diplomatic contacts to smooth the way. The Wrong Way Round perhaps?

This is a relatively mild criticism.

You know what? I think I like to hear Ewan and Charley complaining.  Hey, I do enough complaining myself, so I can tell some genuine heartfelt complaining when I hear it.  It seemed to ring true, and also often had an element of humour thrown in.  To me it is not realistic to hear just the happy stuff on a trip that includes Russia, Mongolia, Kazakhstan, and the Ukraine.  I think Ewan and Charley made a good choice to complain on camera when they were feeling down, and the production crew were right to leave that much of it in the final cut.  (I'm sure some was edited out or even I probably couldn't have got through it.)  The things they complained about seemed all pretty real, and things that anyone might encounter.  Well, what about complaining about all the adoring attention they got in Kazakhstan then?  They were given police escorts, treated like celebrities, weren't they?  Actually, think about it for a minute.  The alternative to being treated like a celebrity is to be blocked at the border and get turned away. The alternative to a constant police escort is to have any car come beside you on the road and point a gun at you.  That was a tough place to get through, no matter who you are.  They also were being held up at endless formal ceremonies and performances when they were tired - we never got to see all those performances because it would be too much even for us TV watching couch potatoes to live through.  So I'm going to cut Ewan some slack there and agree that Kazakhstan could have been more interesting if it was a safe country that they could have travelled through on their own. It seemed like a vast majority of people would have been genuinely warm and welcoming.

And what about some of the sharper Internet attacks?  In one case it was by a KTM rider - OK I understand that, the KTM incident in episode one did not look good for the KTM company.  In another case it was by a fan of fantasy films like "Lord of the Rings".  I think anyone who really really likes Lord of the Rings, while directing sharp barbs at "The Long Way Round", should probably stick to more fantasy films. I think most people who have actually ridden a motorcycle (other than a KTM) should be at least able to sympathise a little with Ewan and Charley's difficulties.

Speaking of Kazakhstan, I find it kind of remarkable that Ewan and Charley made the entire round the world trip without a gun for self defence, while many Americans insist that you can't even go to the corner store or sleep in your bed without a firearm.  Actually, remarkable might be the wrong word, if remarkable means "strange or unusual".  But remarkable means to me "Something worth taking note of".  Actually, Ewan and Charley also did "The Long Way Down" through Africa without guns for self defence.  And it rings true with me, as I rode in Africa for a couple of years without a gun, I have done a bit of riding in Mexico, and lots of places in Canada and the USA with no gun. Except for one incident where someone pulled a gun on Ewan and Charley briefly, there was no need for guns. (And there has not been a need for me yet either) And even that incident in Kazakhstan would not have been made any safer with a gun, unless they were ready  to pull their own guns and kill everyone in the offending car.  But Ewan and Charley did nothing, the gun was put away and the car drove off.  So I score one point for a gun-free defence.

Those who accuse Ewan of being a "coddled" millionaire movie star, really need to take a look at their own "coddled" lives.  Chances are, they  can afford a bike (maybe three or four), and enough food to eat, and have a secure home.  If so, they are effectively just as coddled as Ewan, compared to 2/3 of the world.  And I think Ewan and Charley did a good thing to bring up the plight of orphans in their travel documentary.
Copyright the Lost Motorcyclist