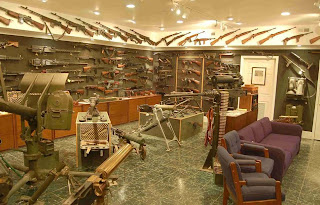 Jim Carrey got himself into some hot water on Fox News.  From what I understand, he made a spoof country-music video about guns.  In this video, one "funny" joke was that Charlton Heston couldn't get into heaven because St. Peter could not pry the gun from his "cold, dead hands".  (and I guess we are to assume Heaven has a "check your guns at the door" policy, also funny)

To some people, this is humour.  But to Fox News, apparently this video is not funny.  So they accused Jim Carrey of being a meddling foreigner, who is getting into the gun debate.  By foreigner, of course they mean he was born in Canada.

It seems this whole idea of being "born in the USA" is starting to become a central idea in the Republican propaganda.  I'm not sure why they have taken this stance, as some conservatives happen to be foreign born also.  (just one off the top of my head, was Senator McCain who ran for President opposite Barack Obama in 2008).

Anyway, coming back to Jim Carrey. He made a Youtube video which is equally accessible to all countries. (I think)  Anyway, I saw it in Canada, and I'm Canadian.  So I assume it was not targeted to the USA exclusively, as this video was funny to me, and we do have our own gun debate in Canada.  Our gun debate is pretty much the same as the USA, with gun nuts claiming to never give up their guns until we pry them from their cold dead hands.

In the final analysis, Jim Carrey made a video for the US website "Funny or Die", and it is available on the world wide web. It's really a low blow to accuse him of being born in Canada, especially since this video is equally available to Canadians and Americans, and applies equally to both.  Technically, I could have made the very same video, and put it up on Youtube.  Does that mean I would be accused by Fox News of being a "foreigner" and interfering in US politics?

In a related note, the Republicans are quite annoyed to find out that Ronald Reagan was in favour of universal background checks for gun owners.  Seems quite natural, as he was a victim of a shooting himself.

Picture: Charlton Heston's gun collection. Go ahead and click on the picture, in case you need a blow-up (not literally of course).  Could somebody who needs that many guns really be happy in heaven?

P.S. Would it cancel Jim Carrey's video if a Canadian-born actor came in on the other side of the gun debate?  Here is William Shatner on why we should not have gun control
http://www.youtube.com/watch?v=SFaLokC9hqk

I think that evens things up.