Self Defence With Guns Lesson 2: Be Prepared 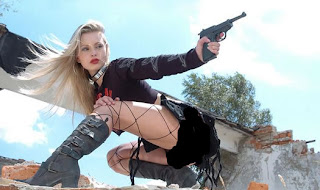 This is lesson 2 in the Public Service education series "How to defend yourself with a gun".  To recap lesson 1, in brief "Do not threaten to shoot people with your gun unless they are actually trying to kill you in the extremely near future."

Now for lesson 2, how to defend yourself with a gun:  "Be Prepared".  In this lesson, I am going to assume the worst is about to happen.  One or more men armed with assault rifles and handguns are planning to burst into your home or car, or maybe just attack you on the street in order to kill you and take your money and your women.  These men are clever, good shooters, and have the element of surprise.

Given the scenario above, how do you prepare yourself?  I'm not talking about learning to aim correctly, that's lesson 3.  In this lesson we are going to learn how to have your guns at the ready at all time.  The strategy is based on the fact that you will have only 4 seconds advanced warning between detecting the attackers and getting your gun out, with a full clip, pointing in the correct direction.

Preparedness starts while you are asleep.  You should have a loaded handgun under your pillow at all time, but don't place your finger on the trigger.  That will come when you are awakened from your sleep by several armed men breaking in through your window with the intent to kill you, and more.

Next, time to wake up.  Depending on your morning ritual, you will probably be in the bathroom at some point.  Make sure the door is locked, and keep the gun loaded and ready at all times, except don't take it into the shower with you unless it is waterproof.  If you are on the toilet, I suggest placing the gun on a nearby shelf.

I am going to assume you can at least wear a quick draw holster with a loaded handgun when eating, driving, or at work.  Some problems will arise if you are involved in sports such as water polo, speed skating, and dog racing.  Actually, let's just include every sport known to man except jogging.  For jogging, you can actually wear the holster. But for other sports like water polo, you will need to disarm for a while.  I suggest a buddy system.  Find another gun aficionado like yourself, who also likes to play water polo.  You offer to guard him while he enjoys the sport, in return for him guarding you while you enjoy the sport unencumbered by a loaded gun.  The buddy system will work fine for basketball, hockey, baseball, football (European and American).  And all other sports except hang gliding, bungee jumping, and water skiing.  It may just be best to avoid those three sports altogether, as there is no known way to defend yourself with a gun while engaged in those pastimes.  If you have some ideas, please leave a comment below.

So now having decided on a strategy to protect yourself from your assailants, it's time to think about protecting your loved ones while you are not near them.  There are three basic ways to do this.  Hiring armed guards is one way.  Another way is to train your loved ones to use a gun just like you do (sleep with the loaded gun under the pillow), and their own buddy system (not using your buddy, but they find their own buddies for water polo or ballet lessons etc.)  The third method is for you to never leave their side, and to keep them in a tight group for defense purposes at all times.  The third method in many ways is easiest, but only for families that have bought into the notion that they may be attacked by armed killers at any time.  Otherwise, they will be difficult to keep together in one place where you can best defend them.  The first method is good, but you will need to be quite rich, and keep in mind you will have to hire another armed guard for each of your family members, the costs add up quickly.

Before I summarize, I am going to discuss the threat evaluation.  If you think the chances are very good of being attacked by armed men, say at least once a year, my methods are appropriate.  However when the threat level drops to one attack in 50 years or more (average), then it may be worth while considering some alternate form of defence that does not involve guns.  The reason I say that is that if you are attacked only once in 50 years, on the average, you may end up losing several loved ones during that time, just from accidental discharges, or gun malfunctions.  I'm just saying that, given the spotty history of gun safety, it would not be practical to keep on such a high state of readiness for more than a year.  But if you're pretty sure you will be in for a shootout within a year, let's continue to lesson 3.  Next time: Lesson 3, how to shoot accurately.

Research for you: On the web blog "Blasphemes", it is reported as a proven, peer reviewed, fact that American use guns once on an average of every 13 seconds to defend themselves.  And that 65 lives are saved for every life lost in gun play.  Considering that about 10,000 lives are lost a year with guns, then it means that in the last ten years, guns have saved 3,200,000, or equivalent to a city the size of Chicago.  And that's in just ten years.  Imagine the carnage if Americans didn't have guns to defend themselves.

Picture: Although this picture came from the website above, it is found all over the Internet, for example it is also on t*ts'n'guns.com.  It is an excellent illustration of just how a typical person would be defending themselves from an armed assault, and it has some propaganda value too, in stirring up hatred against those bad guys who are always trying to kill people like this cute young woman (who I just assume is a "good guy").  I did have to air brush it a little as unfortunately the original pic was too risque for this blog.
Copyright the Lost Motorcyclist