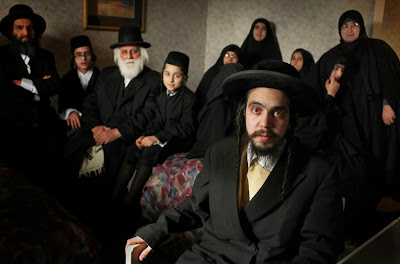 A group of Jewish fundamentalists has left the province of Quebec, and is heading to southern Ontario.  The reason they gave is that they are not allowed to home school their children properly in Quebec, as they are required to teach their children "Evolution".

I find it strange that Ontario has more relaxed laws about the teaching of evolution than Quebec.  When I was growing up in the province of Quebec, it was widely believed that Quebec was a backward province, mired in religion, while Ontario was a modern, progressive province, based on science and reason.  Well, if nobody else believed it, I did.

Then, over the years, Quebec has gradually thrown off the religious image, and has become far more secular, while Ontario seems to be going the opposite direction toward religion. But I still wonder about the given reasons for this religious cult leaving Quebec for Ontario.  My sister, who does not believe in evolution, home schooled her 3 children in Quebec city, apparently without any harassment by the authorities.  OK that was a few years ago, I guess back in the nineties, so maybe things have changed.

There are a few more details in this story from the Montreal Gazette.  It seems that this group has been investigated heavily by the child's welfare services in Quebec, and you could argue that this amounts to harassment.  Seems to me no more harassment than having to go to school every day, though, and many people have to put up with that.

Some other side issues being looked at that are maybe really central issues:
- Child marriages to old men within the sect, and teen pregnancies
- The children have dental problems, and hygiene problems
- The children do not speak either English or French, and seem to not be learning either language.
- There are many other curriculum items, beside evolution, that the cult cannot accept

The leader of the sect also adds that some people in the surrounding community (Ste Agathe) call them the "Taliban" because of their women who have to wear clothes resembling burkas and are confined to the home. (See picture above from the Gazette, you decide)

This religious cult was accepted into Canada in 2004 as refugees,  fleeing Israel, where according to their leader, they were persecuted for not believing sufficiently in Zionism.

The Jerusalem Post reports on the move from Quebec to Ontario
http://www.jpost.com/Jewish-World/Jewish-News/Iran-bound-extremist-haredi-cult-settles-in-Ontario-instead-332837

Toronto Star (more Ontario oriented view, many of the readers' comments are also quite critical of the cult.)
http://www.thestar.com/news/canada/2013/11/22/jewish_sect_says_exodus_from_quebec_tied_to_clash_with_education_authorities.html