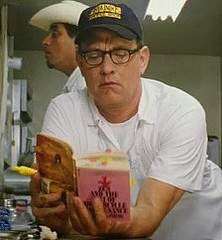 Last night the movie "Larry Crowne" with Tom Hanks and Julia Roberts was on TV. I had wanted to see ever since it came out in theatres in 2011, but never got around to it.  I am always attracted to movies featuring motorcycles, and because of Mary Ann's Burgman scooter, I thought she might be interested in going to Larry Crowne.  But she wasn't, really.

When it came on TV I decided to watch it myself, as Mary Ann still had better things to do.  As I watched the movie, I thought I noticed in one quick scene, that Larry Crowne, played by Tom Hanks, was reading "Zen and the Art of Motorcycle Maintenance".  I wasn't sure, so I googled it and found out that it was true.  And at the same time I came across a conservative website that blasted Larry Crowne for being too liberal in its views.  They also awarded it with only a half "Reagan" (their unit of film stars), and even funnier, at the end of the review they changed their award to a half "Marx" as it was supposedly so extreme to be considered communist/socialist propaganda.

After Debbie Schlussel's harsh review of such an innocuous film, I simply had to do a blog about it.

What were Debbie's complaints?  First was that Larry Crowne was fired by UMart, which she perceived as a thinly veiled jab at Wal-Mart.  So apparently being against Wal-Mart brands you as a pinko, is that true?  Maybe it is. After all Mary Ann and I try to avoid going to Walmart, and extreme conservatives would label us at the very least as as liberals.  (Mary Ann's Wal-Mart boycott is more effective than mine, but still has failed to bring it to its knees.)  Many of the angry Tom Hanks hating commentators, on Debbie's blog, point out that Wal-Mart would never fire somebody like Tom Hanks, who served in the US Navy, and is regularly employee of the month.  Actually one of the conservatives' most beloved legends is that of the retired navy admiral serving as a humble Wal-Mart greeter.

Here is a link to a conservative website that in turn links back to my blog where I am poking fun at the right wing forwarded email about the retired admiral.  I guess my dry humour does not go over too well in some cases.

Tom Hanks was fired during a routine employee cull, where his lack of education got him a red flag.  Actually, not so much a lack of education, as it seems that even just enrolling in college would have spared him getting the axe.  Larry's understanding of the economic system is so weak that he thinks he was "downsized".

So the firing of Tom Hanks has all kinds of ideological implications.  The Conservative view of America is that serving in the military and  working Wal-Mart jobs are good enough to sustain the lifestyle of driving huge SUV's and buying monster homes in the suburbs. Tom Hanks finds out differently when he takes a course in economics at a local community college after he is fired.  And he does not learn about trickle-down free market capitalism either.  There's another good reason to give this movie a half a Marx.

Tom Hank's (I mean Larry Crowne's) education in economics ends up with him dumping his house and buying a scooter to save gas. Actually, to be fair, the idea of buying the scooter came before the economics course.

Another serious complaint about Larry Crowne is that it apparently reverses the Conservative stereotype of willingly subservient women and dominating macho men.  The romantic interests are Tom Hanks and Julia Roberts.  Tom hanks plays a very nice guy throughout the movie, as Tom Hanks often does.  Julia Roberts comes off as kind of bitchy, impatient, hard drinking, bossy, petulant, aggressive, demanding etc., and this does not sit well with conservatives who claim that she is actually playing the man's role, while Tom is playing the woman's.

Another target for conservative ire was the fact that Julia Roberts gave Larry Crowne an A+, seemingly just because she was attracted to him romantically.  Of course this is unethical (if it is true, which it may not be), and I don't think it's fair for conservatives to be harping on this point as if it is a flaw of liberalism. But grading people's speeches is always a bit of a subjective affair, and always open to accusations of favouritism. I once took a community college course, many years ago in computer programming,  where the professor let us give ourselves our own grade at the end. He questioned a guy sitting a few rows back on his self awarded C.  "Why did you give yourself a C?"  "Because I didn't fart too much during classes."  The C stood.  I gave myself an A, and he didn't question it, and I don't actually think it made a bit of difference to my life whether I got a C or an A in that course.

Here is a link to another review, in which "Larry Crowne" is called one of the best movies of the year.

Picture: I got my picture of Larry Crowne reading Zen and the Art of Motorcycle Maintenance out of this second review, where it was correctly attributed.  One of the commentators of the conservative blog called it "Zen and the Art of Motorcycle Riding".  Does that mean one of my favourite books is actually a liberal book?  I really never considered the possibility until now, when a conservative does not get the title right, and the book appears as a prop in a liberal movie.