My Thoughts on the New Harley Davidson Street 500 and 750 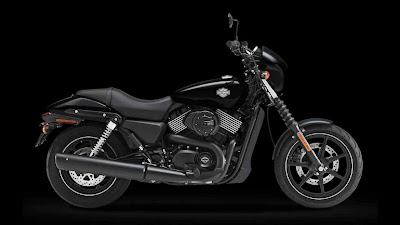 This year, two interesting new bikes were introduced. Polaris brought us the new Indian(TM) to compete with Harley Davidson.  And Harley Davidson brought us a new Indian(the country) motorcycle to compete with Polaris and everybody else.  Actually the Indian Harley will be manufactured in India and the USA (Kansas City), and it will be in two versions, a 500cc and a 750cc.  The 500 will just be a smaller piston version of the 750.

Like most Harley Davidsons, the new Harleys look good to me, with retro styling instead of futuristic Autobot/Decepticon cartoon styling popular in Japan.  And they still have a back fender to catch the road spray.

Recently, I have been avoiding Harley Davidsons, especially the smaller models because of high price, small fuel tank, little rear suspension travel and non-water cooled engines.  These new "Street" models answer three of these concerns, and they are also lighter than the previous Harley "entry level bikes".

The most significant specification to me for the new Indian Harley (I should start calling by the official name, the Street models) is the gas tank size, which at 12.5 litres is much more practical than the Honda Shadow 750RS tank at only 9.84 litres. But the 2014 Harley Sportster "Low" is bigger at 17 litres. However, it could be worse, the current H-D "48" has only 7.9 litres.  If that's a joke, it's not funny.

Almost as important as gas capacity to me to me is the rear suspension travel, a number that Harley Davidson is as reluctant to publicize as their horsepower. Apparently the Street model's travel is a full 2 inches more than the Harley Davidson Sportster Iron. I had to dig a little to find out the 2010 H-D SPORTSTER 883 IRON has only 1.63 inches.  In the road test of the Sportster Iron, Billy Bartels said "it didn't bottom out nearly as much as the Low we recently tested, despite identical suspension numbers and similar preload settings".  Maybe he lost weight, or was riding on a smooth road.

I am not the young guy/girl that Harley is marketing to, as I am now a senior citizen.  But if I was in the market for a bike right now, I would look at their new Street models instead of the more expensive Honda Shadow 750RS with the teeny gas tank.  I'm even less interested in the cheaper but uglier Honda CB500. Although the CB500 is available with ABS, the retro style version is not available in Canada.

I see the comments are already flying about the Street models being a reasonable starter bike.....for a girl.  If I was riding one of those, and anybody actually told me it was a beginner bike for a girl, I would just tell them it was my daughters bike.  According to Mary Ann, I am a pretty good liar.  I don't even have a daughter.  I could chuckle about that all night long.  But hey, I do have a grand daughter.  Wonder if her mom would like her to have a new Harley Davidson?  I'm just kidding,  I doubt if anybody would actually say that to me in real life, of course the Internet is another matter.
Copyright the Lost Motorcyclist