Remembrance Day Heats Up in Lucan 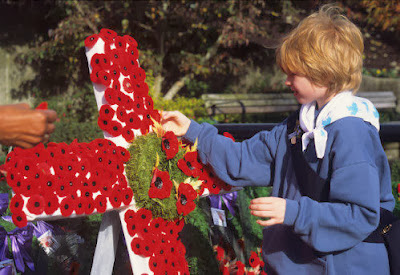 Just a few days before our annual war over Christmas gets into full swing, we have another annual war brewing, the war over Remembrance Day.  As you know, Remembrance Day is the day where we remember those who fought and died in the various wars that we participated in, which when I was in school meant mostly World Wars One and Two.  Now it also means the Afghan War, a war in which we tried to stamp out terrorism by invading Afghanistan, which had allowed Al Quaida terrorists to train openly in the years before 9/11.

So what is the war over Remembrance Day about, and more importantly, why must we have another war?

The opening shots were fired last year, in the tiny community of Lucan Ontario, where the local Public School did not say prayers as part of the Remembrance Day ceremonies.  The Principal decided, given that this was not a religious ceremony, and the school itself was not a religious school, that prayers were not necessary.

Now I must interrupt the story here, as my own experience is this:  When I was a kid, I do not remember saying prayers in school for Remembrance Day.  We sat in our seats in our own classrooms, and had two minutes of silence to remember the fallen soldiers.  I did not live in a big city, and this was back in the early sixties.  That was less than twenty years after the war, and many of our fathers had actually fought in the war, and I don't remember one peep of protest about it.  Not only that, but I attended a Christian Protestant school far from any cities.  To be fair, it was the province of Quebec which didn't have any non-religious schools at the time, and actually the Protestants were closer to being non-religious than the other public school system which was Roman Catholic.

Now to continue with my interruption by filling in a bit of theological background.  It was well known at the time in the Catholic schools that all Protestants went to hell, be they fallen soldiers or not.  And the Protestants were equally sure that dead Catholic soldiers were all in Hell.  So it seemed that by saying prayers, whether Catholic or Protestant, would only have the effect of increasing the suffering of many of the fallen soldiers, and do nothing for those who had already found heavenly bliss.  So I always assumed that the absence of religious overtones was a comfort for those of the wrong religion. (whichever it turned out to be).

Now to get back to the story in Lucan, which has a Catholic/Protestant connection too.  It seems that for over thirty years, the Catholic school and the Protestant (I mean non-religious public school, as this is Ontario) in Lucan have been holding joint ceremonies in the local Community Centre, presumably absorbing all the expenses of bussing in all their kids for the event.  Many parents also attend.  The schools alternate each year in organizing the ceremony.  And remarkably, (to me at least) the Catholics and Protestants have prayed together.  In one way, this is an admirable and much needed improvement on the religious discord between Protestants and Catholics that went on in my home town.  But it is a little late, as these days we have many other religions adding to the mix (Jews, Muslim, Hindu, Buddhist etc) and we also have an increasing number of Atheists. So while the Catholics and Protestants in Lucan were finally getting their act together, other ideas were creeping in from the big cities, and last year the public school decided to stop saying prayers at school sponsored ceremonies.

But given the new situation, where Christians are starting to feel under fire from liberals, immigrants, and liberal atheists, the Catholics and Protestants banded together in Lucan to insist on prayer in the ceremony this year.  However, the Public school decided to skip the confrontation and have their ceremony in their own school instead.  Predictably, this did nothing to avoid a confrontation.

The London Free Press website (the closest big city) has a poll:

"Do prayers have a place in Remembrance Day ceremonies? "


I don't like the question, as it seems to avoid the problem of how to let everyone have their own prayer, be it Protestant or Catholic, Jewish, or other, without offending anyone. My question is, Have any Canadian Soldiers who are also Jewish or Muslim, died in any Canadian war?  And if none have died, can we be sure none will ever die?  Maybe we should be at least be preparing for the eventuality by changing the immortal words "Between the crosses row on row", because Muslims and Jews do not use the cross as a grave marker.

Picture: Found on the Internet, could not find the credit for it.
Copyright the Lost Motorcyclist