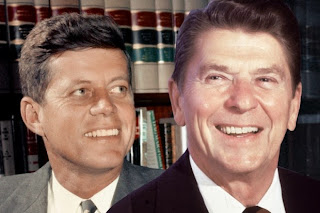 We have just had the 50th anniversary of John F Kennedy's death.  The memory is fuzzy now, I seem to recall that it was announced by the teacher while I was in school, but I don't remember which teacher or which grade.

Now we come to a modern headline attributed to Fox News.  "JFK posthumously joins the Republican Party".  That headline appeared as a text crawl in the Simpsons cartoon a few years ago, and resulted in the cartoonist Matt Groening receiving a warning from the Fox owners that he must stop putting fake Fox News crawls on his weekly TV animation.  Apparently, because people could not tell the difference between joke news and Fox news.

Now making it much harder to tell the difference between humour and fact:  On the 50th anniversary of JFK's death, Fox News joins a "growing body of thought" that JFK was more a conservative than a liberal.

This growing body of thought is backed up by a book by Ira Stoll  "JFK, Conservative".  Here are some quotes from Kennedy's life to back up the research.

I don't want to say these quotes are cherry-picked, or that they ignore famous quotes where Kennedy called himself a liberal, but let me take the worst of them for a closer look.

"5. I’d be very happy to tell them I’m not a liberal at all…I’m not comfortable with those people. Saturday Evening Post, June 1953 "


I don't actually have the book, I'm not sure if the "dot dot dot" was in the book or not.  But as a self-taught bullshit detector, I have learned to recognize telltale signs, and one of the easiest to spot for a novice is "..."


The full quote is actually

“I’m not a liberal at all. I never joined the Americans for Democratic Action—I’m not comfortable with those people.”
John F. Kennedy in the Saturday Evening Post, 1956"

Other than getting the wrong year, the missing "..." actually is about joining the ADA, a liberal organization that ranks politicians on a scale of 0 to 100 on their liberal views.  They were like a self appointed organization to define who was liberal and who was not, and how pure they were with the liberal agenda.  It seems to me that the "..." on this web page is being used to leave out important information rather than unimportant information.  If Kennedy refers to "being uncomfortable with those people", he is not referring to "liberals", he is referring to a specific sub-group, the ADA.  It's kind of like a conservative distancing themselves from the Tea Party.


What's next on the conservative agenda, now that JFK has joined their ranks?  I expect to see a Fox News crawl on the Simpsons "Lee Harvey Oswald posthumously joins Democratic Party".  Except, of course that the Simpsons can no longer do news crawls attributed to Fox News.