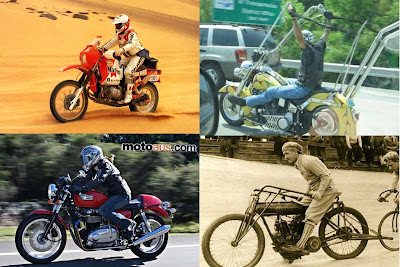 This may very well be something I shouldn't write about. Maybe it's illegal, maybe it's unsafe. But for many years I have used alternate riding positions in order to be comfortable on long motorcycle rides. And with a country as big and empty as Canada, there are a lot of long lonely motorcycle rides.

The worst thing you can do for comfort is remain in a fixed position for many hours without moving. Numbness sets in, in the rear end, and even in the hands and wrists. You can overstress your back and neck. Even if you have a soft pillowy seat and a nice backrest.

It really does not take much moving around to make things more comfortable. At the very simplest level, you could lift your rear off the seat, just enough to allow daylight between your rear and the seat, for just a couple of seconds, and repeat every five minutes. If you start doing this before you start to go numb, you will remain comfortable for a long time. It's easier to do this on some bikes, such as standards, but it can also be done on many cruisers, providing the floorboards are not placed too far forward.

Even this simplest little move may be too difficult for some riders to do safely, I don't really know. I don't ever read about other people doing this much, so maybe it is considered dangerous, or that only a professional should attempt it. I know I can do it any time I want, and not lose control of the motorcycle. I can even do it leaning over in a curve. And I use a few other seating positions that are probably a lot harder. Lifting the rear end is one of the easiest and safest "tricks" I do.

One problem with cruiser motorcycles is that they force you into a single position. It's very hard to ride them standing up, and it is very hard to even slide back on the seat a few inches, because of the ledge between the rear and the front seat. On a standard motorcycle (before the 1980's), the passenger seat was level with the driver's seat, so if you didn't have a passenger, you could slide back as far as you liked.

What a lot of cruiser riders do is add forward mounted footrests so that they can ride with their legs stretched out. That gives another position, but it is only good on long straight stretches without gear changes or braking. That's because usually these highway pegs do not have the foot controls, and so you will never see this type of footpeg offered by the manufacturers. Because of liability problems.

I don't have these forward highway pegs, but one thing I can do instead is to sit on the passenger seat. It does require a large and possibly dangerous movement, and maybe some people would lose control doing it, but in my opinion, a good rider should not have a problem learning to do this. Maybe it should even be a training requirement. Once on the back seat, I can also move my feet to the passenger pegs if I want to, but there are no foot controls. At least I still have the front brake available in an emergency. I never ever sit on the back seat in busy areas or heavy traffic where I am driving defensively. The main difficulty with the back seat is leaning forward to reach the handlebars. If I don't have a windshield, leaning forward from the passenger seat is actually very comfortable, as it just balances the wind at 110 kph. With the windshield on, this particular position is not much use, as it becomes too uncomfortable holding yourself up.

Without the windshield, you can use the wind to good effect. Or you can choose to let it make you tired. I choose to let the wind help me, by leaning forward into it. This takes the weight off your back and seat, and it should also allow you to relax your grip on the handlebars. If you lean back, then you will need to fight the wind for many hours and you will become tired. If it were not for fog, cold, and wet weather, I would never use a windshield. (although sometimes bugstorms are worse than rain!)

Picture: Four riding positions clockwise from the top left.
*Dirt riding, often from a standing position to allow the legs to absorb the bumps.
*Ape hangers, on a cruiser, this bike has highway pegs for good measure. I would not recommend the high handlebars (called apehangers), in any case they are illegal almost everywhere.
*An old fashioned position, lost favour when decent brakes were invented.
*A modern cafe racer, crouched forward. Can be comfortable at higher speeds without a windshield.
Copyright the Lost Motorcyclist