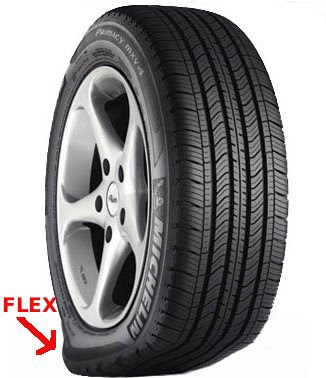 I am not a big fan of the low profile tires that are becoming more popular every year. So when shopping for
my Toyota Matrix back in 2005, I was disappointed to find that they came with 55 series tires, which I consider fairly low profile. The extreme low tires would be about 35 or so, and no manufacturers I know of would sell a car with wheels that low. But custom tuners like to change the tires for extra low profiles mostly for the appearance, but also there a few benefits.

Low profile tires have very short sidewalls, which are not very flexible. Actually, the shorter the sidewall the less there is to flex and that's what makes it stiffer. If the sidewall is flexible, the car will wobble a bit while driving around corners at higher speeds.

When a car is at rest, the sidewall flex is centered. But when going around a corner at speed, the car will flex both sidewalls in the same direction. You can actually feel this effect of a car parked in the driveway, simply by pushing the car sideways on the fender above the front or rear tires. The car body will generally move when you push it, although the tire contact patch does not move, and if you look carefully, you might see the movement of tire's sidewalls flexing back and forth. On my mother's 1995 Chevy Cavalier with 65 series tires (taller sidewalls), when I lean on the back fender and try to move the car sideways, I can easily get it wobbling about an inch each way, and I can see the front of the car also wobbling, but in the opposite direction to the back. (This type of motion is called "yaw", where the car rotates back and forth about a vertical axis somewhere in the middle of the car. A car with shorter sidewalls will naturally have a much stiffer resistance to this pushing.

Doing the same thing to my Toyota Matrix, with 55 series tires will move it very little, and both ends of the car tend to move the same way. This is on Michelin Primacy MXV4 tires, which actually have quite soft sidewalls for their height. Some tire makers try to produce tires with more flexible sidewalls, not because they want to make the car wobble while driving, but to make the ride softer. These Michelin tires actually seem to be designed to feel as soft as a 65 series tire even though their actual height ratio is 55.

The tires that originally came with the car were Goodyear Eagle RSA's which have a fairly stiff sidewall. They are a more performance oriented tire with a slightly harsher ride and more road noise. The advantage of the Goodyear Eagle RSA's was that in driving around a curve, the car did not feel like it was loose or floating. Actually, it was so precise that I had to be careful if I hit a bump, because my hands would move the steering wheel a little and that alone was enough to alter my line through the corner.

With the Michelin Primacy MXV4's (whew, wish Michelin would go back to simple names like they used to have. When was younger, the only Michelin tire you would ask for was called the "Michelin X"), the Matrix does wobble a little more in the corners than the Goodyears, but I actually like that because it isn't dangerous at the speeds I drive, and it feels more normal to me. I may drive fast at times, but the car is still way more precise than any older car I've driven except maybe my Honda Civic.

Because of the softer sidewalls, the Primacy MXV4's have the advantages of the higher profile tires, such as a softer ride, a bit less noise, and less tramlining on the highway grooves. But for winter driving, I still change the wheels from 16" to a more old fashioned 15" with a 65 profile, and go with narrower, taller winter tires. They may not look as cool as the fashionably wide low profile tires, but they do the job when conditions are at their worst for traction. In the winter, I am just trying to survive for another year.

Another issue with the shorter, stiffer sidewalls, is that they are more prone to vibrate due to variations in stiffness of the sidewall. We didn't used to worry much about when the sidewalls were so tall and flexible that everything evened out, usually. But not so much today with the lower, and hence stiffer sidewalls. So now shops that deal with tires also may have a road pressure measurement tool, that can turn the tire as if it was rolling on an imaginary road, and measure the variations in force between the road and the axle. If there is too much variation, usually due to variability in sidewall stiffness, the tire cannot be balanced to make it ride smoothly.

Here is a summary of the advantages/disadvantages of wider tires, and typically lower profile tires are wider, but not necessarily: Bigger contact patch for more traction, can lose contact with the road in slush and water puddles (hydroplaning).
Copyright the Lost Motorcyclist