Jesus Quotes for Dummies: "Turn the Other Cheek" 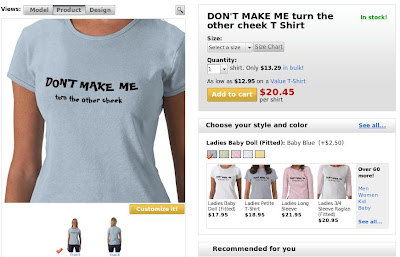 There is a famous quote from Jesus "If someone slaps you on the cheek, turn the other cheek". This is considered a "provocative" teaching, in that it tells us to deny our instinct of retaliation and revenge, and adopt a non-violent response. In this short teaching, Jesus not only tells us to not respond to violence with our own violence, but to even assist the aggressor by giving him (or her I suppose) the other cheek to slap.

The original Christians took Jesus' message to mean they should be non violent in their own lives. In the early years of Christianity, it was assumed that a true Christian could not even join the military. But as Christianity spread and became the official religion of the Roman Empire, obviously the interpretation had to adapt to the new situation.

Today, many who call themselves Christians no longer have problems with this teaching, because there are now many people to help them reinterpret it, and explain what Jesus really meant, and to tell them when this teaching does not apply. With these new explanations of Jesus' teaching, Christian TV evangelists support such things as pre-emptive war, torture of prisoners, political assassination, and the Israeli occupation of Palestine.


Update: An explanation of "Turn the other cheek" at this blog
http://lostmotorcycles.blogspot.com/2011/01/turn-other-cheek-also-means-nations.html

[the following is sarcasm, because in my opinion this "violent Christianity" is nothing more than pure hypocrisy]

I have decided to throw this question back to Jesus Himself, and get Him to clarify this potentially frustrating situation he left us with, in trying to honestly follow His teachings. Meanwhile, there are a bunch of legitimate ways that you can get around this requirement of turning the other cheek without feeling bad that you are not following Jesus's advice.

Here are a few situations that come to mind, that I want explained by Jesus Himself.

2. Say an orangutang (which is a monkey, not a human) slaps you on the cheek. Do you have to turn the other cheek if it's not even human or can you hit back. And if you can hit back against a monkey, than what about other men of different skin colour that I, as a racist Christian, consider non-human?

3. If a bad man tries to slap my cheek, but is so uncoordinated or feeble that he cannot do it with any force, should I assist him by slamming my cheek into his hand?

4. If my country is attacked, must the entire army stand around waiting to get slapped on the cheek and then after they are slapped, turn the other cheek and surrender?

5. Say a mass murderer is caught, tried and convicted. Must we let him go, and furthermore set him up with some new potential victims? Or can we go ahead and execute him. (humanely of course)

6. Say we have a suicide bomber in custody, and he knows there is a hidden atomic bomb set to go off in New York. Can we torture him to find out where it is? And if he doesn't talk with mere waterboarding, or if we're not sure he's telling the truth, can we go ahead with mutilation. And if we're not sure mutilating him worked, can we also mutilate his wife and children? Because after all, we're talking about millions of good Christian people dying in an atomic blast vs. one little case of torture.

So I guess that should give Jesus something to think about. Next time, maybe He won't be spouting off with his left wing pacifist BS before thinking it through. Or maybe God should just check with me first before delivering any more sermons from the mount. 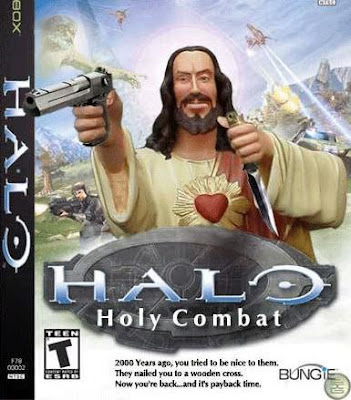 Until Jesus gets back to me with some answers, I think it is pretty safe for the Judeo-Christian countries to continue the policy of pre-emptive war, where, just in case another country looks like it might one day want to attack us, we can bomb the crap out of them right now and put an end to it before it starts. And we can also carry on a policy of assassination of foreign leaders who look like they are not friendly, and may one day want to slap a tariff on the oil we are drilling on their land. (Are you listening, Hugo Chavez?)

More importantly, we can continue the policy of stealing land from Palestinians, and if any of them fight back, we can bomb and kill a hundred times as many in retaliation. And if any of the suicide bombing terrorists happen to hide near women and children instead of standing out in the open, we can just go ahead and kill all of them with a clear conscience. And if we catch any terrorists we can torture them till the cows come home.

But the best part of all this is that we are still Christians, and we can still boast that we are the peace loving ones, because after all it says right in the bible that Christians "Turn the other cheek". Isn't it great to be a Christian? We are saved from hell by our personal love of Jesus.


Pictures: So many to choose from, this is a very controversial topic I guess
1. Game http://uncyclopedia.wikia.com/wiki/Halo
2. Wanna buy the T-Shirt? http://www.zazzle.com/dont_make_me_turn_the_other_cheek_tshirt-235522205793096742
Copyright the Lost Motorcyclist