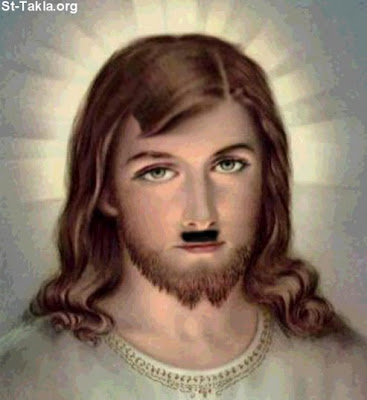 I don't know the Koran, nor do I want to read it because apparently you can be murdered for repeating anything found in there, or for drawing a cartoon of Mohammed. So I will just stick to the bible for now.

If you believe, as Evangelicals do, that every word of the bible is the word of God, then God is kind of like Hitler. Here is a little quiz. Which of the following statements were made by Hitler, and which were in the Holy Bible?


And he brought out the people that [were] in it, and cut [them] with saws, and with harrows of iron, and with axes. Even so dealt David with all the cities of the children of Ammon. And David and all the people returned to Jerusalem.

"And Israel joined himself unto Baalpeor: and the anger of the LORD was kindled against Israel. And the LORD said unto Moses, 'Take all the heads of the people and hang them up before the LORD against the sun, that the fierce anger of the LORD may be turned away from Israel.'"

"And the earth opened her mouth, and swallowed them up, and their houses, and all the men that appertained unto Korah, and all their goods. They, and all that appertained to them, went down alive into the pit, and the earth closed upon them: and they perished from among the congregation. And all Israel that were round about them fled at the cry of them: for they said, Lest the earth swallow us up also. And there came out a fire from the LORD, and consumed the two hundred and fifty men that offered incense."

"Thus saith the LORD of hosts, I remember that which Amalek did to Israel, how he laid wait for him in the way, when he came up from Egypt. Now go and smite Amalek, and utterly destroy all that they have, and spare them not; but slay both man and woman, infant and suckling, ox and sheep, camel and ass."

"And they utterly destroyed all that was in the city, both man and woman, young and old, and ox, and sheep, and ass, with the edge of the sword."


According to the Bible, these sayings were all by God, not Hitler.

I welcome any comments from people who believe every word of the bible is true, and at the same time insist that their religion is peaceful, and furthermore spread stories about Islam being the religion of hate and war.

There is actually a peaceful message that is in the bible somewhere:

And let's use good judgment on the rest, meaning forget about the scientifically unsound myth of creation and Noah's ark. The Bible has some inspiring messages and other than that it also has some primitive nonsense and blood lust. Maybe its the same for the Koran.

Picture: That is the God of the bible, with the Hitler mustache and cowlick. Strange, that I was not able to find a picture of God with a Hitler mustache on the entire Internet. So I had to photoshop it myself. It is TOTALLY NOT a cartoon of the prophet Mohammed.