Bait and Switch: Not all Gods are the Same 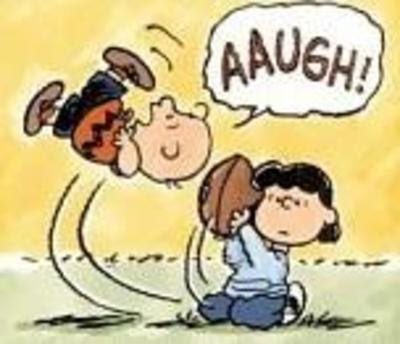 When picking a religion there are two questions. Does God exist? and if so, which one is the true God?

So, assuming God is all powerful and can do anything, here are the top ten things God CANNOT do: (thereby proving logically that an all powerful God does not exist)

Now for the Pro-God side. Suppose there is a God, who is all powerful and has an IQ of about a kajillion, or even a little more maybe. Actually it would have to be more than a kajillion, because His intelligence would have to be unimaginably high, and I can imagine a kajillion. Imagine God having to deal with the previous ten anti-God statements, made up by mere mortals. It's enough to give God a headache, if He could get headaches. Geeze, I just thought of one more thing He can't do!

Let's bring it down to a level easier to understand. Trust me, that I am much smarter than my cat. Now imagine my cat trying to prove I don't exist, and coming up with various proofs that make sense to him. Half the time he manages to convince himself I do not exist, such as when I call his name, but he just sits there and doesn't answer and doesn't even look around to see what I want. That is a metaphor of why it is ridiculous for us to try to prove God doesn't exist, and why God doesn't try to answer our stupid questions.

There are also lots of proofs that God DOES exist, but they are nowhere near as fun as the proofs that God does not exist. You can check out this Wikipedia entry for the most famous proofs. After skimming through this page, it seems that something has to be the origin of everything, and whatever that is, it's called God, therefore God exists. Or something like that.

So assuming you either decided God exists, or at least are still undecided, you now have to pick a religion. You wouldn't think this step would be necessary, as an all powerful God would be a God over all the religions. But you would be mistaken. Although you have been told that God exists, based on Him being the universal and supreme being, the creator of all things, all people, all animals, of the earth and time and space, the fact is that no religion believes that their God is the same as the other Gods. For each religion, the "supreme being" is their God alone, that He speaks to no one else, and helps no one else.

So once proven that God exists as a universal and omnipotent being, you are then told that God is actually the tribal deity over a "chosen" group of people. And even to the chosen people, he will not reveal Himself, because then it would be too easy for them to believe in Him.

It's like a bait and switch marketing scheme. You are lured to the church with a claim that this is the most powerful God on Earth over every living thing that ever existed or will ever exist, and when you check it out you find out this God is only for one religion. That is what is called in the marketing world, the "Bait and switch" trick. They bait you with their most appealing product, and when you're lured in to the showroom, they switch the deal to a somewhat less appealing product. Apparently this marketing trick is pretty common and is successful most of the time, just look what they did with sub prime mortgages. And online dating.