Queers Against Israeli Apartheid Back in the Pride parade 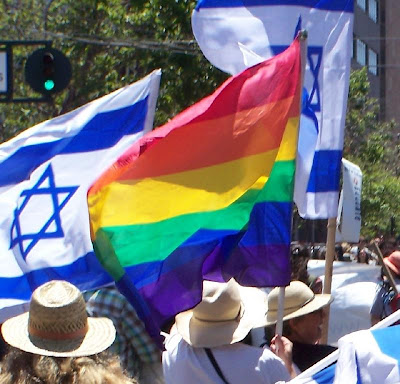 Recently, I was sent a copy of an email by an activist friend of mine, which was critical of the group "Queers Against Israeli Apartheid". I had no interest in it initially, but on second thought I decided to look into this unusual development.

This group was going to be banned from participating in the upcoming Toronto Gay Pride parade, which has become a major event. But after some protests, the ban was overturned.

My question is why are the gays, lesbians and transsexuals supporting Palestinians, while Palestinians themselves apparently discriminate against homosexuality? At the same time, my understanding is that Israelis were very tolerant.

After I read a bit on this web page, explaining the origin of this group

more questions arise and some answers.

The Israeli treatment of Palestinians is probably worse in many ways than the Palestinian discrimination against homosexuals. Not being a homosexual or a Palestinian myself, I am not an expert on these issues, and I may not fully understand the discrimination each one faces. And furthermore, maybe I'm using the incorrect terms such as "queer" instead of LGBT. In which case I apologize, but I am not anti-gay/lesbian/bisexual/transsexual/queer. I am simply for universal human rights and freedom.

Homosexuals, even in Islamic countries, do not have their rights taken away unless they are "discovered", and even then, their entire families are not punished by having their houses bulldozed. Homosexuals are not marked from birth to be denied housing and free access to jobs. Homosexual leaders are not regularly targeted by missile attacks in densely populated areas.

On the other hand, I am told that homosexuality is something that has been around a long time, and apparently homosexuals exist all over the world, and throughout history, in many antagonistic cultures.

I find it interesting that a homosexual group such as this would take the trouble to speak out in support of other people (like the Palestinians) who have been denied their rights, even though most Palestinians may not be queer themselves, and may discriminate against homosexuals.

Meanwhile Israel has apparently been the only country in the middle East to openly tolerate homosexuals, while gays are persecuted in the Islamic Arab countries.

Here is Wikipedia on Israel, Palestine and homosexuals
http://en.wikipedia.org/wiki/LGBT_rights_in_Israel

Meanwhile, this right wing web page calls gay marriage in Israel "Worse then the holocaust" and "far worse to allow the homosexualization of the Holy Land than to give back land to the Arabs" I guess Rabbi Levin thinks it is better to give the Holy Land back to the Arabs than to allow homosexuality.

Also, homosexuals can still be (illegally) murdered in Israel, presumably by Orthodox Jews:

Then, in a weird turnaround, Israeli settlers plan "Jewish Pride" parades through Arab neighbourhoods in retaliation for "Gay Pride" parades in Israel.

And a long article about the politicization of homosexuality, and how it is affected by the occupation of Palestine.

And furthermore, a documentary on the Iranian practice of forcing sex change operations on homosexuals.

It's hard for me to draw any conclusions, but still, I find it interesting that Gays, who have plenty of problems of their own, are not so self absorbed that they can't also express support for fellow human beings who are suffering from discrimination for a different reason.