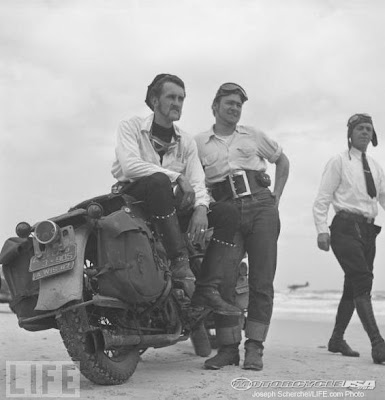 The book "Bike Fever" by Lee Gutkind is like a ghost from the past for me. It was copyrighted in 1973, and as I read it in 2010, I wonder if I have actually read it before. I don't remember, actually, whether I did or not.

When it was written, I was just starting out in motorcycling. My two stroke Yamaha 250 was brand new. The Hells Angels were still just a bunch of fighting drunks who loved motorcycles and Nazi helmets. The British bike industry was on its last legs as thousands of young people were buying the ever larger Japanese machines. The median age of motorcyclists was about 26 years old. Travelling across the country was still a great adventure. "Zen and the Art of Motorcycle Maintenance" had not come out yet, but "Easy Rider" was already part of the folklore. All motorcycles were "standard" motorcycles, we did not yet have "Dirt Bikes", "Touring Bikes", "Sport Bikes", or "Cruisers". Harley Davidson was still in business, but many suspected it was in even worse shape than the British bike makers. And all motorcyclists were suspected of being outlaws. Especially if they had a leather jacket, and worse if it was black.

There were a couple of flashbacks for me, especially a comment that the only difference between riding a bike in the Sahara or on the moon was the availability of air. For the last ten years (or so) the picture on my motorcycle website was my Honda on the moon with the caption reminding you to bring air. Did I get that inspiration from reading a book even though I don't remember it?

Today the median age of motorcycle riders is in the mid fifties. I am still within 5 years of it, so I guess I was part of the generation that really stuck with motorcycling. When this book was written, I was still about the median age of other motorcyclists, but I was 35 years younger than I am today. Apparently not as many young people are getting into motorcycling any more. And it's not surprising, if you read some of the reasons to ride a bike in 1973. It was cheaper than a car, you could go places with it that you couldn't take a car, it was easier and less expensive to repair on your own. It got better gas mileage, and emitted less pollution. You could park it anywhere and you didn't need a special drivers licence. Insurance was cheaper (in the province of Quebec where I lived it was actually not even required, and I didn't have any). Almost all those reasons have evaporated over the years.

In the book, Lee Gutkind speculates about the Hell's Angels

"But what prevents another motorcycle group, hungry for similar publicity, or even an old ladies' canasta club, from christening themselves "Hell's Angels"? Motorcyclists were not even the first to own the Hell's Angels label. Long before Porterville, or even Hollister, the Hell's Angels were a crack fighter squadron for the United States Army Air Force."

My, my, how times have changed. Try calling your gang the Hell's Angels today, or using the flaming skull logo, and you will find yourself visited by a gang of highly scrubbed lawyers driving SUV's, and throwing around lawsuits like the Angels used to spill beer. The Hell's Angels have grown into a legitimate corporation, although still arguably involved in criminal activity. They hand out franchises like McDonald's, to any innocent group of wannabe's that lust after the Hell's Angels cachet.

Another section of the book gets very psychoanalytical of the disease known as "bike fever". This is the disease where all you can do is daydream about motorcycles. And even worse, it is linked with sexual urges, with the main accusation being that the motorcycle itself is mechanical penis extension. I remember this argument from the seventies, but I have not heard it for many years. Also known as "Motorcycle Syndrome", "Dr. Nicholls reports that his patients were mostly impotent, obsessed with worry about discovering they were homosexuals, and haunted with fears of mutilation and death."

Again, times have changed. There were no "Gay pride" parades in 1973, nor could you marry your same sex boyfriend. Homosexuals were well and truly marginalized, unable to appear on TV or be recruited in the military. Even the false accusation of being homosexual could get you beaten up. People apparently spent a lot more time in the seventies repressing homosexual urges than they do today. OK maybe that still happens today, but not as bad, and not everywhere. Now we pretty well know that motorcycles have nothing to do with homosexuality, and even the Christian fundamentalists have more important things to worry about than gay bikers.

When I was younger, I did actually worry a little about these psycho-pop verdicts, because to be quite honest, I did daydream about motorcycling, and I used to like riding my motorcycle a lot more than most people thought was healthy, even other motorcyclists. But today I realise that this disease is not just for motorcycling. You could make the same accusations about TV, computers, video games, riding lawn mowers, golf, surfing, poker, KFC, or vacations in Cuba. The number of perversions (such as these) has spread and diversified so much that motorcycling seems quite normal now. Actually, when I go to Port Dover on a Friday 13th I do worry a little about the mental health of all the other motorcyclists who go there. Including Dave McDonald, our local weatherman on CKCO TV in Kitchener. He talks about his motorcycle during the weather report. That's another example of how times have changed.

Picture: Daytona Beach 1948 from this web page, says all you need to know about motorcycling madness.