The Long Way Round, Compared to What? 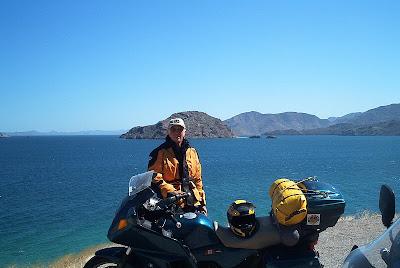 On Sunday, I was talking about the movies "The Long Way Round" and "The Long Way Down". A friend of mine, who has given up motorcycling as his years advanced, said to me that he thought "The Long Way Round" was actually quite easy, with the support vehicles and crew, and all the money. And that he was more impressed with a trip I made back in 2004, where I went alone on my motorcycle, leaving in late February, and going to Loreto, on the Baja Peninsula in Mexico, and back.

In "The Long Way Round", a couple of movie actors, Charley Boorman and Ewan McGregor, travel from the U.K. across Europe and Asia through Mongolia, and Siberia to Alaska, Canada, and then across America to return home to the UK. And they made a documentary film of their adventure.


I myself was pretty impressed with Ewan and Charley's trip. And although I really enjoyed my own trip to Baja, it was very unstressful compared to Mongolia and Siberia.

The significant differences would be in the amount of experience I had, and in the difficulty of the trip. In my opinion, the amount of money and presence of a support crew and planning staff do not make the trip that much easier. I had experience doing the coast-to-coast North American trip, and all the money I really needed for comfort, and I never missed having a support crew. Ewan and Charley had practically no experience at all travelling long distances by motorcycle, they didn't even have experience in riding motorcycles, and their bikes were also new and unfamiliar.

I was on paved roads virtually all the time. They were in entire countries where they hardly saw a paved road, and often no roads at all. I was in only three countries, and all three were very motorcycle friendly. Ewan and Charley were in Mongolia, and Russia, and a lot of other places where they do not try to make it easy for tourists. And their trip went entirely round the world, while mine stayed on one continent.

I was amazed by the sheer audacity, or recklessness, of just heading out there on motorcycles and going around the world, with their level of experience. (basically none, at the start) It was a few years since I saw it, and honestly I could not remember whether they took support vehicles or not. Must be my memory going on me.

Ewan and Charley ran into a lot of difficulties on their trip, but kept going regardless. Ewan kept falling down, because he was riding a very heavy bike off road. Roads were blocked by rivers. Bad weather. Accidents.

My own trip was like a stroll in the park. I had all good weather, and that was not just dumb luck. I took full advantage of accurate weather tracking, now available to anyone with a TV, all over North America. I was riding with fully tested gear and equipment, including the motorcycle and the clothes. I took advantage of excellent roads, and good facilities all the way down, even in Mexico. I slept comfortably in motels every night, and ate at friendly restaurants with familiar food. My trip required minimal planning, actually none at all, other than an attempt to learn a little Spanish, and reseaching requirements on crossing the Mexican border.

I suppose with enough bad luck, I could have been faced with even worse difficulties than Ewan and Charley. I could have had an accident, I could have frozen in a blizzard, or been robbed at knifepoint, or even killed. Yes, every trip has the potential of turning into a nightmare. But on the other hand, when you have done similar trips dozens of times, you mostly eliminate those random chance problems. There were very few times on the trip when I doing something new that I had no experience at all in.

In one place, half of the road in Mexico had collapsed, washed away, and there were no warning signs posted, or cones or flares. Nothing. A couple of hundred metres of road (again in Mexico) were under water. I avoided both those obstacles by luck or experience. I never got the runs (Montezuma's Revenge) for eating local tacos. I never got hassled by corrupt cops. Only one person even asked for money, I see more panhandling than that in Kitchener.

I encountered a couple of other motorcyclists from Texas whose bikes had both broken down. My bike did not break down, and maybe I can take credit for that, maybe it was just a really good bike (1992 BMW K1100LT) that I had already driven for 90,000 km basically with no reliability issues, or accidents. Another motorcyclist, on a bike similar to mine died in an accident the day I was there and I met some of his companions after the accident. I suppose that could as easily have been me.

Some of the most difficults moments for Ewan and Charley are not only with the obstacles and dangers, but with each other. I never had that problem on the Baja trip, as I was alone, or I was free to leave anytime the other people's agenda didn't suit me. And I didn't have to worry about somebody else crashing and ending the trip for me.

Actually, what Ewan and Charley did was so monumental, that my own trip is kind of unworthy in comparison.

Pics: From My Baja trip. Also in this album, with precise GPS locations if you care to check them out.