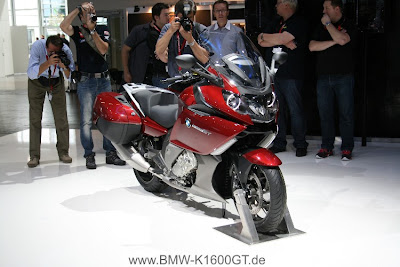 The big German motorcycle show, Intermot opens today in Cologne. And the new 6 cylinder BMW K1600GT (and GTL) have now been unveiled.

At the last Toronto show, I went to the BMW booth to ask questions and the Canadian BMW people seemed to dismiss the idea of BMW ever producing this six cylinder thing, and now only ten months later the K1600GT is rolled out at the Cologne show.

Weight is important to me. I don't know the exact weight yet. However, it seems that BMW is aiming for under 700 lbs, which is about my upper limit, and places the K1600GT in the same class as my old K1100LT, or my even older 1982 Honda CBX (another inline six sport touring bike with about the same weight).

In my opinion, both the new bikes qualify as "Sport Touring". I know there is a lot of controversy about the definition of a sport touring bike. For me, at about 700 lbs. it becomes a heavy touring bike and I won't consider buying it.

BMW's categories never made much sense to me. They classified my 1992 K1100LT as a heavy touring bike, even though it was 200 lb. lighter than a true heavy touring bike like the Gold Wing. Then they stopped producing the K1100LT and replaced it with K1200LT, and added 200 lb to the weight of the bike.

So excepting the heavyweight touring bikes, the K1600GT is in my opinion the successor of such bikes as the Brough Superior, the Vincent Black Shadow, the Honda CB750 Four of 1969, the 1981 Honda CBX Six, and the 1992 BMW K1100LT. All of those bikes were top sport touring bikes of their time. Although the K1100LT never was a very popular bike, it definitely was the most expensive, and it had a lot of advanced technology for the time (such as ABS), and pioneered the electric windshields.

Looking at the pictures, you can see the K1600 has the new adaptive headlight, and I think I see an extra high mounted LED brake light on the trunk. But I don't see the adjustable handlebars of the K1300GT. All you can see of the engine are the sides. The rider's boot toes look to be exposed to the elements, which is surprising given the width of the engine, and also there is no crash bar, I don't even see a bumper pad to protect the fairing in case the bike falls over. The only visible hint of six cylinders is in the six outlets in two mufflers, and the number six embossed on the engine cover. (I guess that's a pretty good hint)

Some of the GT model looks like they have a higher seat than the GTL, so that might be an option on either bike. The handlebars look the same on both bikes, which is a surprise to me, I expected shorter bars on the GT than the GTL. Some shots show a rider and passenger sitting very close to each other. Unlike a heavyweight touring bike where there is usually lots of space between passenger and driver.

The problem that sank my K1100LT after 15 years and 160,000 km, was the dry clutch splines. The K1600 has a wet clutch, so that problem goes away. All my other bikes have had problem free wet clutches, so I like that change.

Finally, what is the price and availability? Still TBA. A couple of months ago people started to put deposits on the K1600's, sight unseen.

I'm looking forward to the next big step before hitting the dealers showrooms next year, the press introduction and write ups in the magazines like Cycle Canada.