Why Am I Seeing So Many Trike Conversions? 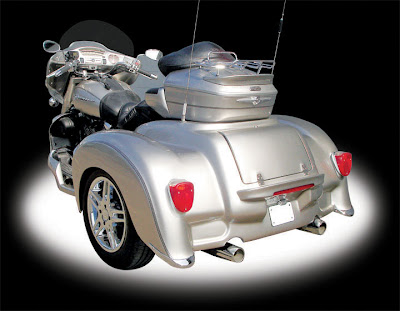 Twice in the last week, I have spoken to someone who has converted a motorcycle to a trike. In both cases it is because the weight of the bike was getting too much for them. Today I heard a friend of mine has just bought his first bike in many years, and it is a Honda VTX1800.

Am I seeing a trend here? People buying bigger and bigger motorcycles, and eventually ending up converting them to trikes.

Today I read a review of my Vulcan 900 Classic LT on this website.

"In recent years the Big Four Japanese manufacturers have dabbled in the more diminutive touring class, offering fully functioning longer-haul machines that are easier to ride and handle than their big brothers. It's not to say they are small bikes--just comparatively, yet a bit more manageable. One such off the showroom floor bike is Kawasaki's Vulcan 900 Classic LT" - Toph Bocchiaro, Baggersmag.com

OK Hold it right there. "in recent years?" "diminutive?". It's as if teeny weeny tiny*** bikes like the Vulcan 900 are a new invention. Not so.

Let's put the size of the bike in perspective, and to do that, I will go by weight. I'm sure I could pick a lot of things to measure size, but I like to look at weight because the weight is what makes it fall over, and hard to lift up and push uphill. The weight also kind of indicates how big it is in length, width ands height, as well as how much metal is used vs. plastic. I'm not going to put a colourful bar graph here, but look at the numbers and compare.


For comparison, here are some historical weights of what we call normal bikes, all functional motorcycles, and a few current normal or even excessively large bikes.


Notice how the bikes seem to have increased in weight over the years? Here is my question. How fat are we now, that a 657.1 lb bike is called diminutive, while in 1929 a 420 lb Harley Davidson was a heavy bike.