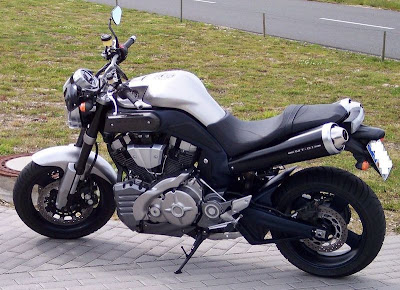 Sunday morning, as I was riding my Vulcan to Tim Horton's in Cambridge, the weather was beautiful. And I was being followed by a car with a huge pink feather sticking out of the drivers window. To outsiders, this could mean anything, to a Kitchener resident, this can only mean Oktoberfest is on, and time to get as far away as possible.

Luckily, I had a meeting to attend at Timmie's in Cambridge. One of the members of our motorcycle club would be bringing his new bike, a Honda VTX 1800N. So we spent quite a bit of time outside staring at it dumbfounded. Until that time, I had considered getting a smaller sized tire for the front of my Vulcan 900 because the stock tire looked a bit too big. But after I saw the 150 sized tire on the VTX1800, and looked back at my 130 sized tire, it actually looked too small.

There were plenty of bikes and bikers to talk to in the parking lot. I guess the weather, the Canadian Thanksgiving weekend, and Oktoberfest all played a part in getting bikes out. I happened to speak to a young couple on two bikes on the subject of the motorcycle road tests. That is the test in Ontario, where you finally get your full motorcycle licence by riding on the road with the tester following in a car. The young woman thought that her previous bike could not have passed the road test because it was only a Honda CBR125, and you are supposed to merge onto the freeway at 100 kph. Apparently the CBR125 cannot reach 100 kph in the space allowed by an average on ramp. I suggested how about leaning down to cut wind resistance, and the answer was that the testers do not like to see you leaning down during the test. After this conversation, I asked Mary Ann about it, because she had recently passed her test, but on a bigger machine. The first point was that the freeway next to the test centre has a speed limit of only 90 kph, but everybody goes 100 anyway. So Mary Ann asked the tester before the test "What do I do? stick to the speed limit or merge in at the same speed as the traffic? The tester said "Merge in at the same speed as the traffic then gradually slow down to the legal speed limit." The testers are supposed to answer your questions before you take the test, and they encourage you to ask questions before (not after) the test. Anyway, the young woman at Tim Horton's should have no trouble getting up to speed with her new Suzuki GSX650F.

After our meeting broke up, the gravitational pull of Port Dover was very strong because I was already at the south end of Cambridge. And in Port Dover there were even more bikes, one in particular caught my eye, it was a Yamaha MT-01. The owner (presumably) was leaning on it, so I walked over to find out more about this unusual machine. He was telling me about how many foot pounds of torque it had, and then said he wasn't sure if it was foot pounds or pounds feet. I said "Either one is acceptable, I looked it up on Google once.". He said "You sound like a teacher." Well it's true I used to teach science forty years ago. I guess he would know because he was a school principal. I told him the only thing I really didn't like about his bike was the exhaust pipes so close under the seat, it could get hot. He told me that Yamaha had put a fan under the back fender to keep the seat cool. I looked under the fender and didn't see anything, and said this sounds like you are bullsh*tting me. He said yes it's there, just look here, and pointed to the fan intake, which I guess I missed at first glance.

Picture: the MT-01 from http://commons.wikimedia.org/wiki/File:Yamaha_MT-01.jpg