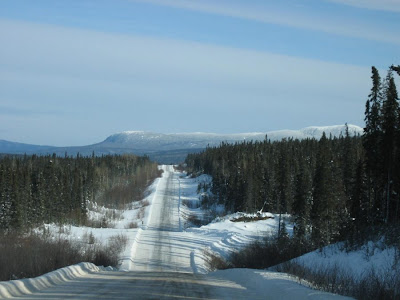 Here, finally may be a form of transportation where the drivers are more exposed to the weather and to accidents than motorcyclists are. I had a chance to watch one of these shows the other night at my mother's house (I don't get the History Channel, and I also don't get why this is on the History Channel). My first thought was that these were not actually "Ice Roads". In Canada, a paved or gravel road covered with ice is an "icy road". To be an ice road, there must be nothing but ice, with water underneath. But then I started thinking about the types of roads where we have a layer of gravel or pavement over permafrost, with a layer of ice over that. Kind of like an "Ice sandwich road". But none of this quibbling really matters. The real issue is the driving, and the fact that people understand that their lives depend on their ability and their attention to the job.

There are many good previews and short segments on Youtube, but also a few spoofs that should not be mistaken for the real show. In the episode I watched, the road was the Dalton Highway from Fairbanks to Prudhoe Bay. There is a similar road in Canada I always get confused with, called the Dempster Highway.

During the show, an oversized load was being transported accompanied by two "pusher" trucks. Going up the steep hills, the two pusher trucks get behind the load and with nothing more than bumper to bumper contact, help the big load up the hill, at what appears to be a fairly high speed. I would guess about 80 kph. Typically in steep mountain areas, without pushers, trucks may slow down to first gear to get up steep hills, and crawl up the hill at walking speed. It was not explained in this episode why the two pusher trucks were being used, as it looked like they were not carrying a payload, and trucking companies are not used to wasting money like that. There was one other use for the pusher trucks, and it was coming down the hills. One pusher truck would get in front of the load carrying truck, and help it slow down coming down the hill. I'm not even sure it's legal on most public roads. But it certainly makes for great entertainment, for anyone who has an interest in roads and driving.

[Update Oct 28, 2010: I was speaking to a truck driver on this subject and apparently the pushers are needed because even with chains, the wheels will lose traction when you gear down to climb the grade, with an oversized load like that.]

At a few times during the show, the producers inserted animated clips to illustrate the dangers of these operations. For example, how a truck may tip over if the load shifts or what could happen when the load falls off. The animations were fairly realistic, and each time my mother saw a truck go off the road or crash, she gasped. I had to tell her "It's just an animation". She would reply,"But I'm surprised nobody got killed anyway." ""Mom, an animation is a cartoon drawing like "Snow White and the Seven Dwarfs", but this is just more realistic."

I kind of suspect the dangers are somewhat dramatised. Because if you wanted to, you could certainly make a TV show of a normal commuter's drive to work in Toronto, and make it seem like death is just around every corner. But it is a fact that there is a much higher death rate among these truckers than among normal commuters. Probably about the same as the rate for motorcycles. And it is good to see people at least paying attention to their driving instead of sending text messages.

One of the clips on Youtube is about a truck driver hitting a moose. Just to help keep you car drivers more alert, note that although the driver was not injured, the truck had to be towed away. Those moose can get big.

Apparently, the first season was actually done on ice roads. But the trucking companies were not very impressed with the overall attitude of the show, and made so many new safety rules that the producers moved the show somewhere else, and that's when they started getting away from the "Ice Roads", but still kept the same name as most people don't know the difference between northern mountain roads and ice roads. The next season they will be going to the Himalaya Passes, which could make the Dalton Highway look as safe as the Blue Ridge Parkway.

Doris Wiedemann and Sjaak Lucassen, have recently done the Dalton Highway in winter, on two wheel motorcycles. (I need to specify two wheels because sidecars and trikes might have made the trip much less intense). They were Germans, if that helps explain anything.
http://www.bmwmoa.org/news/ride_stories/arctic_circle_beckons_for_doris_wiedemann

Picture: It's a picture I took myself, in February 2007 on the road to Labrador. It was an icy road, but not an "ice road"..
Copyright the Lost Motorcyclist