Motorcycles Need to Watch Their Weight 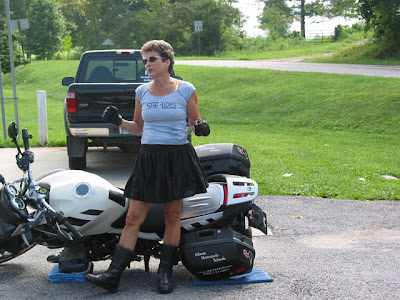 I have never dropped my Kawasaki Vulcan 900 yet, but a month ago I came very close. It was Murphy's Law. I offered to give one of Mary Ann's friends a ride, and she stood at the curb fully dressed ready to go while I drove the motorcycle out of her driveway and on to the street to let her climb on. She is not an experienced rider, and I didn't want to scare her by dropping the bike right in front of her. As I stopped in front of her, I just barely prevented it from falling over. Amazing, because there was nothing unusual that I was doing. But if that bike had weighed any more than its 650 pounds, it might have gone down, or I may have wrenched my back out. But because the Vulcan was a "medium weight" or as some may say a "Diminutive bike", I saved it and I'm sure to her it just looked like a normal stop.

I have a personal limit for the weight of my motorcycles, it's around 700 pounds. There are several bikes out there that I will avoid because they are too heavy for me, the Gold Wing and a few of the other heavy duty touring bikes. I consider all those bikes to be nothing more than the first two thirds of a tricycle conversion.

I have often heard it said that "the weight just disappears when you get moving". Well, I don't worry about dropping a bike once it gets moving (barring a skid or collision of course). But I have never found the weight to be a benefit on the road. For example, it does not make the bike any steadier in a cross wind for me. That may be because of how I drive. There is also no noticeable down side to weight in normal cornering, because countersteering can force any size bike to lean. But I suspect a lighter motorcycle may have an advantage in sudden swerving maneuvers, and of course in acceleration.

The weight is a problem for me when the bike is standing still, or almost stopped. Also getting it in or out of the garage, or a parking spot, or putting it on or off a stand. All of these tasks are more difficult the heavier the bike is.

A manufacturer can lower the CG (centre of gravity), to make the bike less likely to fall over. They do that by moving heavy things lower, such as the battery, or the engine, or the gas tank. Another thing that can be done with the gas tank is to try and stop gas from sloshing back and forth, because gasoline typically runs to the low side which is the side you are about to fall over on. But there are limitations to how much stuff you can put at the very lowest part of the bike. You also have to allow for leaning in a curve, which means that you are more limited in width the lower you go on the bike.

All this lowering of the CG doesn't help if you are pushing a bike up a hill, because all the weight has to go up the hill whether it is located high or low on the bike. And it does not help with acceleration either. And when it comes to acceleration, there is some type of weight that is even worse, that is rotating weight like tires. Not only do you have to move the tire forward down the road, but you also need to use power to make it spin faster and faster. The heavier tires slow you down in both ways. And of course, everybody wants the heaviest tire possible because big tires are fashionable now, even though they cost you in performance.

There is one promising place that the manufacturers can save weight. That is by making stuff of plastic if possible, instead of steel. One big weight saver is plastic fenders. Plastic fenders also never rust, they keep the mud off you just as well as steel fenders, and they look the same as steel when painted. What's not to like? I don't get it when people go around tapping on fenders to see if they are steel or plastic. (No, actually I do that myself, but it's not because I hate plastic, I just am interested sometimes in the difference.) On my old BMW, they also made the entire rear luggage rack and even the saddlebag hinges out of plastic. OK, the hinges broke once, but the rack never did. So maybe they know how to make really good plastic these days. Now on my Kawasaki Vulcan, the chrome looking engine side covers and cylinder head covers are also plastic. I never saw anything like this plastic before, the plastic's shiny finish does not wear off, the plastic does not melt when the engine gets hot. But I'm still pretty sure it's plastic.

So if the bike can get it's weight down below 700 pounds, I'll consider it. The new BMW K1600GT is just on the borderline. For a bike like that, I may make an exception, or maybe I could start hitting the gym. ("Hitting the gym" means doing some exercises that give you more muscles and less fat, which is another way to minimise the weight of the bike.)

Picture: This is the BMW rider "Skert" who I have seen at a BMW rally teaching people how to pick up a dropped bike. I have never been lucky enough to drop my bike right where somebody thoughtfully left a few towels, so unlike Skert, my bike usually gets scratched up if I drop it.